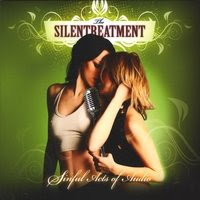 The Silentreatment want to bring back the big sexy visuals and over-the-top energy that rock concerts emanated back in the days of glam rock. The Wilkes-Barre, PA quintet has been together since 2005, but in three short years has developed a reputation as a high energy performer with both fans and colleagues. The Silentreatment’s debut CD, Sinful Acts Of Audio, is full of songs that will make denizens of Glam Rock proud while retaining a modern edge that should appeal to today’s modern rock connoisseurs.

Sinful Acts Of Audio starts off with Pretty Little Girl. The song comes off sounding like a Glen Burtnik/Plinky creation. The song has big hooks and great guitar sound and should have great commercial potential. The Secret sounds like latter-day Aerosmith where the hard edge has been glossed over so many times it becomes smooth. Boogie re-asserts the Glen Burtnik/New Jersey sound. The Silentreatment slow things down for One Night Stand, transforming from a piano ballad opening into a gothic slow-core pop tune. Other highlights include My Darling, The Shore and the ultra-mellow Sweet Ending.

The Silentreatment are a post-modern rock band with sincere commercial intentions. The songwriting is solid and the play is above average, but there is something missing here. The Silentreatment are obviously a very talented band, but Sinful Acts Of Audio sounds like their first priority in writing this album was to be ultra-commercial. The music has a lot of energy and a lot of hooks but the heart that sounds like it wants to break loose here is severely muted. It's a good album, just not the great album they might've made.