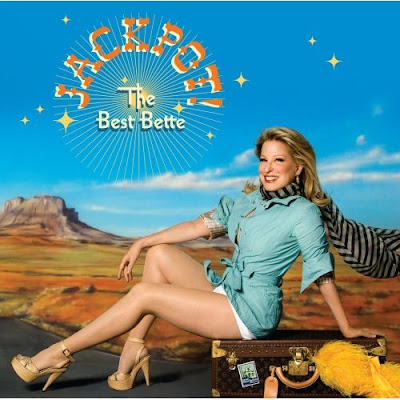 Bette Midler is a singer, actress and comedienne who has a distinguished 43 year career is show business. Stating out as a movie extra in 1965 (Hawaii, released in 1966), Bette quickly found her way to New York City. After playing in a pair of off-Broadway shows simultaneously in 1965, Bette found herself on The Great White Way as Tzeitel in Fiddler on The Roof in 1966 (a role she would play until 1969). She began performing in bathhouses in New York City in the early 1970’s. Her accompanist for those early gigs was none other than Barry Manilow. From these early beginnings sprouted a career that has seen Bette on Broadway, television and the silver screen. She has toured the world several times over, won four Grammy Awards, four Golden Globes, three Emmys and a Tony Award. Ms. Midler has also been nominated for two Oscars and currently headlines in Las Vegas. The Divine Miss M has earned her pedigree and status in the industry. 2008’s Jackpot: The Best Bette is the latest compilation to touch on highlights from Bette Midler’s career. While full of its highs and lows, Midler has never been anything but the consummate entertainer. Her voice migrates easily from jazz to pop to rock and roll, and Midler can sell a song like nobody since Sinatra.

Bette Midler has always been very at home with the whole Las Vegas small orchestral jazz/early rock and roll style profligated by the likes of Louis Prima, Bobby Darin and Sinatra; this is aptly reflected on Jackpot: The Best Bette. In The Mood shows Midler in her comfort zone with a first class jazz arrangement. As with every song Midler places her own personal stamp on this rendition with a campy, sassy flair. This Ole House is a little different than what you might normally expect from Midler. It’s one of those seminal songs from country music that seems to work well in any era and in a multitude of styles. Midler’s rendition is faithful and melancholy and full of life.

Midler has fun camping it up on The Rolling Stones’ Beast Of Burden. Here we see the wanton side of Midler’s schtick, channeling her inner Janis Joplin. The Rose is Bette Midler’s signature song and accounts for one of her four Grammy Awards. The song is as beautiful and poignant as it was 20 years ago. The same goes for The Wind Beneath My Wings. There are certain songs that once they’ve been done covering them is a pointless exercise. Midler owns these two songs in ways no one else ever can. Other highlights include The Glory Of Love (the jazz standard, not the Chicago song),Hello In There, From A Distance and her Andrews Sisters inspired take on Boogie Woogie Bugle-Boy.

The music business doesn’t encourage performers like Bette Midler anymore. Midler cut her performance teeth the old fashioned way. She worked her tail off from the ground up, along the way developing performance skills that stand up alongside her incredibly talented voice. There has never been many in music, movies or television who could match Midler’s talent and versatility, but she may be the last of the great show people. Folks like Audra McDonald, Taye Diggs, John Lithgow and Tim Curry can play to the same crowds. Each has shown the ability to own a crowd in a performance as Midler does, but there’s no one in showbiz who can do it night in and night out like Bette Midler. If you’re a new acquaintance, Jackpot: The Best Bette is a great chance to get to know The Divine Miss M. If you’re an old friend this is a great collection of memories. Either Way, Jackpot: The Best Bette is required listening for anyone who wants to learn the art of selling a song.

You can learn more about Bette Midler at http://www.bettemidler.com/. You can purchase a copy of Jackpot: The Best Bette at Amazon.com or wherever CDs are sold. Bette Midler is currently performing 100 shows a year at The Colosseum at Caesar’s Palace in Las Vegas. The show debuted on February 20, 2008 and will run through 2010. If you’re head to Vegas your trip won’t be complete without tickets to this show, entitled The Show Girl Must Go On.
Posted by Wildy at 5:00 AM

I very love"from a distance"