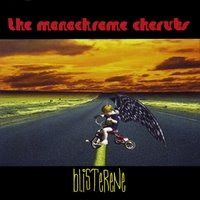 New York City's The Monochrome Cherubs could probably play six degrees of separation with almost anyone in the music business. Vocalist/guitarist Tim Lacy has a professional resume that includes performance as well as audio engineering and production. He's worked with acts such as Radiohead, INXS, Carly Simon, Lou Reed, Yoko Ono and Savatage. Drummer Mike Sciottos has played with Jefferson Starship, Marty Balin and Commander Cody, among others. Lead guitarist Nick Moroch has played with the likes of David Sanborn, Vanessa Williams, David Bowie and Jessica Simpson. Colin Almquist has seen action with Jake, Lynch, Spin Cycle Lava and Voodelic. Recording in New Paltz, NY, The Monochrome Cherubs have spun off a top-notch DIY recording in Blisterene.

The opening and title track, Blisterene sounds like Kim Mitchell's Rock and Roll Duty. In many ways the Monochrome Cherubs are you classic hair band. If you took Kim Mitchell, Poison and Extreme and mixed them all up you'd have a band that sounds like The Monochrome Cherubs. Rip-Off is pure 1970's rock with big guitar solos, big choruses and big harmonies. Vocalist Tim Lacy comes across as very soulful here. Shakedown is a big classic rock anthem that would sound right at home on 1980's AOR stations alongside bands like Triumph, Styx and Journey.

The Monochrome Cherubs show off their more polished side on Don't Blame Me. This is arguably the most commercial sounding track on the album. Ordinary People is also a standout track. The Cherubs strip everything down to the base for this one and show off some real chops that sometimes get lost in all of the big guitar sound.

You can learn more about The Monochrome Cherubs at www.myspace.com/monochromecherubs. You can purchase a copy of Blisterene at www.cdbaby.com/cd/monochrome3.
Posted by Wildy at 5:27 AM