CD Review: Random Touch - A Box And A Word 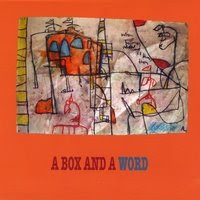 True Avante Garde music is anachronistic and unpalatable to those who do not get it. 20th Century modern classical music is full of examples of these musical splatter paintings. The style has carved out a small niche among music fans that enjoy melodic and cognitive dissonance in their music but has for the most part not made much of a dent in the popular music scene. Bands who have attempted to draw the spirit of "neo-classical" music into the popular realm have generally met with unkindly fates ranging from minimal record sales to forced breakups. It's a brave band that trolls these waters, and Illinois' Random Touch is such a band.

Random Touch has its roots in the 1970's collaborations between high school mates Christopher Brown and James Day. Scott Hamill (guitar) entered the picture in 1978, and camera/video artist Matthew Ebbin came along in 1998. Random Touch has always integrated video into their creation process, and has never shied away from any sort of sound or sensation to aid in the birth of their music. Get ready, as Random Touch's ninth release, A Box And A Word, takes you across the Rubicon into a land of smashed landscapes and sonic malfeasance. Batten down the hatches, your ears will never be the same.

I will stick by the high-minded description of Random Touch's music as musical splatter paintings as the collaborations are recorded chaos. Random Touch in general performs and records spontaneously without revisiting or dubbing recordings. Song structure is for the birds here; instead band members offer up musical thoughts on a stream of consciousness basis. The end effect varies from mildly amusing musical contradictions to downright painful junctions of sounds that should never occur. The highlights here are more in terms of level of interest than beauty.

Tripping So Fancy is the ultimate musical splatter painting. It's a musograph of cognitive and emotional dissonance that is highly disturbing. On The Way is space age music played by a grunge band directed by John Tesh inside of a House of Mirrors. It's incoherent and disturbed and draws the listener like a bad auto accident draws drive-by gawkers. Opera Of Vaudeville is perhaps the most unique vision on A Box And A Word. It takes two alternative musical realities of sound and superimposes them on one another. Opera Of Vaudeville is almost coherent at times and disturbingly schizophonic throughout.

Be sure to check out Steady Flux (Dear X), which is likely the closest thing to coherent musical composition on the album. My personal favorite was Climbing The Tower, which can be best described as Salvador Dali's Nightmare Closet come to life. Also notable was Changeable Weather: a conglomeration of classically themed piano, coffee house/beat poetry drumming and cheesy 1980's new age meditation music. Changeable Weather becomes a meltdown of musical structure and coherent thought into a morass of disconnected thoughts or impressions.

A Box And A Word is like Schrödinger’s Cat for the listener. You can't know whether it will be alive or dead for you unless you give it a listen. It has tremendous potential in either direction depending on your own musical tastes. It is not an angry collection of aural tools like you might hear from a Nine Inch Nails; rather Random Touch is a nearly dispassionate provocateur using all media at hand to disturb and contrast your inner peace. Like looking into the mirror in the dark, you don't know what part of you will be reflected until you open your eyes (or ears). It's either a work of genius or pure madness. I'll leave it you do decide which.

You can learn more about Random Touch at www.myspace.com/randomtouch. You can purchase a copy of A Box And A Word at www.cdbaby.com/cd/randomtouch3.
Posted by Wildy at 7:03 AM