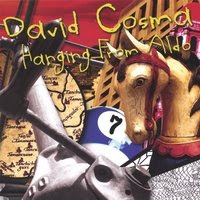 David Cosma grew up idolizing music from the 1950’s and 1960’s. He so much liked Paul McCartney that he started playing his guitar left handed (on a right handed guitar). Cosma learned to play the guitar backwards without restringing it. This has led to something of a signature sound and technique. The Melbourne, Australia based musician previously fronted a popular local band called Mistamash. 2008 sees the release of Cosma’s first solo album, Hanging From Aldo. It is the culmination of Cosma’s decision to leave his full time job in 2007 and devote himself entirely to music.

Hanging From Aldo opens with Sentimental Shoe, a mellow tune with a great chorus. Cosma displays a keen atmospheric sense in his writing. He’s fairly low energy at times as a vocalist, but juxtaposes that against musical creations of distinct tension and angst. The end result is very interesting listening that is nuanced and discreet. What You Just Said is a great acoustic guitar-based tune wrapped around the dysfunctions in a relationship. Cosma’s mix of melody and lyrical genius here is amazing. This is the sort of song that will definitely be a concert favorite, but will find currency in all sorts of fans at different times in their lives: this song seems to speak to emotions that we’ve all been through at one time or another.

Bryant Reserve is a great little blues/country hybrid that shows some of the soul shadings in Cosma’s voice. Up In The Clouds is a slightly repressed pop tune with a great melody and very simple composition. It sounds like the sort of tune The Traveling Wilburies might have run off in a recording session. This is my personal favorite on the album. A close second is Now It’s Time. Great harmonies and a melody to die for make this song unforgettable. There is a slight alt-country-rock feel to this that reminds me of The Waltons/Jason Plumb. Other highlights include Out Of Me, Ninety Days, the colorful Letter Home and Take It As It Comes.

Hanging From Aldo took a few listens for me. This is not a casual listen disc. There’s too much going on, and much of it is beneath the surface of the still musical waters Cosma projects. What sounds mellow and relaxed is really full of angst or tension or a deep current that won’t express itself on first glance. This is a very rewarding CD for folks who give it the proper time and attention. David Cosma creates on a level with someone like Daniel Lanois. Finely crafted pop songs with country or Americana trappings are the rule here. Gorgeous melodies supported by uncomplicated structure and lots of musical nuance and intelligent lyrics are the shadings and nuance that will keep you listening time and time again.

You can learn more about David Cosma at http://www.davidcosma.com/. You can purchase a copy of Hanging From Aldo at www.cdbaby.com/cd/davidcosma.
Posted by Wildy at 5:53 AM