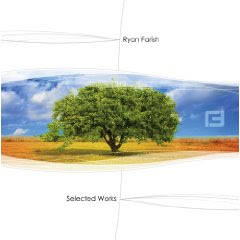 Ryan Farish is a testament to how Indie/DIY can work. Starting out on his own, Farish became one of the most popular artists in cyberspace via the old MP3.com. 1.8 million (yes, million) downloads later, Farish had established himself as one of the most popular artists in that site’s history. His songs reached the #1 download spot for his genre 38 times, and led to his music being used on The Weather Channel, and by a number of different movie and television production companies licensing units. Selected Works is a collection of early, rare recordings from his MP3.com days.

Selected Works is a collection of pop/instrumental tunes based heavily in piano/synth, with electronic beats and loads of ambient texture. Call is nouveau new age; mellow disco/dance tunes with lively rhythms and fairly simplistic melodies driven through variations and reprisals. The set opens with Night Winds, a bass-line driven ambient composition that works well as an electronic slow-jam. As A Child has a pure pop-radio sound. You could picture Kylie Minogue or someone of that ilk laying vocals over the top of this piece. If Only is one of the standouts here, sounding like something that might have occurred had John Tesh collaborated with Tangerine Dream.

Dreams In Essence D has a dark-timbered ambient flavor to it, but withers somewhat on the vine. Run To You is pure nightclub material and would do well in that environment. Ancient Dreams is a song you could envision in a motion picture as environmental music. The mix of Native American style flute sounds (electronic) and primal drumming rhythms (again, electronic) speaks well of the composer’s intent, but ultimately becomes something almost cliché. Going Home takes the lite-jazz approach to electronic pop.

Ryan Farish is talented at what he does. In a musical sense, much of Selected Works is fluffy, down-tempo dance pop. While it’s all very listenable, much of Selected Works falls into the category of pleasant but not terribly exciting. Its great music for the background, but not something I’ll feel compelled to pull out and listen to again and again. It just doesn’t express itself as essential.
Rating: 2.5 Stars (Out of 5)

You can learn more about Ryan Farish at http://www.ryanfarish.com/. You can purchase a hard copy or download of Selected Works at Amazon.com.
Posted by Wildy at 5:00 AM