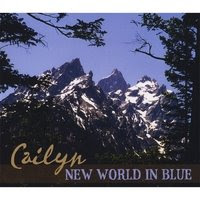 Cailyn Lloyd spent much of her teenage years playing in the blues/rock scene in London, England. The guitarist/bass player had a reputation for intensity and rocking the axe better than most of her male counterparts. Lloyd stepped away from performance for a number of years, but found herself thrust back into the scene years later in Fond Du Lac, Wisconsin. Currently the lead guitarist for Fond Du Lac powerhouse IX Lives, Lloyd is striking out on her own with the side project entitled New World In Blue.

Cailyn Lloyd can play with the best of them. Her take on Jimi Hendrix' Little Wing is both reverential and expansive, with Lloyd adding her own little touches without really changing the original. Vocalist Ric Prida is in fine form here. Lloyd's original composition Clouds includes some decent guitar soloing, but is fairly light in content and composition. New World In Blue is an arrangement of Dvorak's Ninth Symphony, Movement #2. The piece has a Malmsteen-like quality to it without all of the grandiosity. For Elise is Lloyd's arrangement of Beethoven's Fur Elise. It is reverent of the original but done primarily on electric instruments.

Cailyn Lloyd is a talented guitarist, but doesn't offer up much that's original on New World In Blue. Her arrangements of classic tunes shows a certain talent on the part of Cailyn Lloyd, but we'll have to hear a little more from her before making a full judgment in that regard. For now, New World In Blue is a capable introduction.

You can learn more about Cailyn at www.myspace.com/cailynrox. You can purchase a copy of New World In Blue at www.cdbaby.com/cd/cailyn.
Posted by Wildy at 5:10 AM