CD Review: The People's Party - We Am One 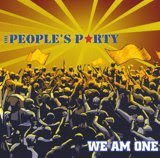 Massachusetts native Curtis James is the prime mover behind The People's Party. The Venice Beach, California band mixes rock, jazz, hip-hop and whatever else amuses them into a musical patois dubbed hippie-hop. The People's Party travel around the country in a truck that becomes a concert stage at the push of a button, allowing for the sort of impromptu concert/parties that really endear a band to a crowd. Add to all of this the band's progressive ideals and positive humanistic and you have the sort of musical experience people wait in line for. With 2008's We Am One, The People's Party hope to reach out to the world and inspire social change based in mutual respect and tolerance, all while having a great party.

We Am One opens with Sunrise, a neo-jazz/funk concoction that is lyrically repetitive to the point of being bothersome, but musically is very well done. The song musically reminds me of the sort of material Sting was making late in his "jazz phase". Chloe is an example of what Sublime might sound like if they rooted themselves in Jazz rather than Reggae. It's a very entertaining piece that is part Jazz/Ska hybrid and part cabaret. Bass guitar fans will be thrilled with Black Widow, a talk-sing piece of hip-hop that relies on bass guitar, drums and saxophone for its musical bed. Get your dancing shoes on for this one.
The eclectic (and mostly acoustic) We Am One is not only the title track but also the standout track on the album. It’s catchy and irresistible. Also be sure to check out Divinity, which has some of the best harmonies you'll hear on a pop record in 2008 before breaking into a mellow talk/sing rap tune. Other highlights include My Friend, Tell Me, Now, What We Do and Fade Away.

The Party's People succeed in getting their positive message out to an audience. Mixing varying musical styles into a brand that is all their own, The People's Party have something for everyone. We Am One is a purely entertaining musical experience. Several melodies here will vie for your head space once you're done with the album. We Am One gets a strong recommendation from Wildy's World. The People's Party are a band to keep your eye (and ears) on.
Rating: 4 Stars (Out of 5)