The WAG are a four-piece from Middletown, New Jersey with three lead vocalists and penchant for pop purity. We’ve previously reviewed their most recent album, Soundtrack To A Silent Movie, and were so impressed we thought we’d go back and take a listen to some of their older material. 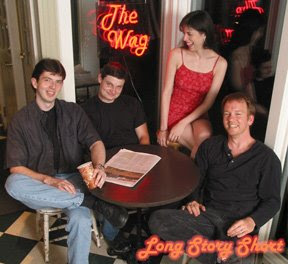 Busting right of the gate of Long Story Short is I Got The Girl, an energetic romp through the world of a player. The Wag then jumps right into Snap, a delicious 1970's flavored rocker replete with poly-chromatic harmonies, a walking bass line and bar chords galore. Even Paper Cup, a country flavored acoustic rocker displays a distinctive energy and winking sense of humor. The WAG doesn’t take themselves too seriously on Long Story Short, and the fact that they had fun making this record permeates every song. Other highlights include She Hides, the southern rock influenced Ain't Nobody and the bluesy Record Man.

Ordinary Day opens with Hold On (The Leaf Blower Song), which sounds like early Rolling Stones material. The song is catchy with a great melody and a killer bridge. Tonight relies on one of the filthiest guitar hooks you've ever heard and a strong 1970's feel. Often may be the most intriguing song on the disc. It starts out at sort of a drunken musical stumble and becomes a song that rues the breakdown of a relationship. There is a low-fi, recorded live feel to this song that might give a clue to what The WAG sounds like on stage. Far and away my favorite song on the disc is I Still Love You, a good old fashioned rock and roll tune with a 1960's flavor. Ordinary Day closes with Ballad #2, an optimistic song that might be fitting for a class reunion. There is an Americana flavor to this "What If" song that feels very comfortable.

Ordinary Day is a lo-fi exploration into the joy of making music. The Wag at this point were making music for survival and for fun, and both sets of emotional inertia are readily apparent. The live in-studio recordings are refreshing as a look back at the genesis of a band that in a perfect world would have their music played everywhere. If you want to get back to rock and roll made for the h-e-double-hockey sticks of it, then The WAG is what you need.

You can learn more about The Wag at www.thewagband.com, where you can purchase copies of Long Story Short and Ordinary Day.
Posted by Wildy at 6:24 AM

Hai friend, Your blog is very nice and you had good content! Never give up, increase your creativity to be a great blog and always get the best idea to make new content of post. I just want support......

Hope u have a great day!