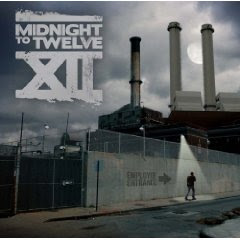 Midnight To Twelve has been working for eight years for a moment like this. After playing hundreds of live shows in the LA market and opening for acts such as Buckcherry, Jimmy Eat World, Evanescence and Joan Jett, Midnight To Twelve appear to be on the precipice of stardom. The band's first single, Slam was featured on hit show One Tree Hill. Another song, How Bad was featured in this year's Stanley Cup television coverage. In June of 2008, Midnight Twelve released their self-titled 2nd album. It's only a matter of time before this thing catches on.

Midnight To Twelve opens with How Bad, a middle-of-the-road rocker full of effects that sounds designed to curry favor at modern rock radio. It's a fairly generic opening that will play well to radio but not terribly memorable. Ditto Future and Story, moderate tempo hard rock ballads that seem to lean heavily on a commercialized sound. Burnin' turns the corner in a barn-burning rock-and-roll performance. Burnin' shows all of the hunger and tenacity that were produced out of the first three songs on Midnight To Twelve.

Midnight To Twelve slows things down a little with the rock ballad anthem Slam. This is perhaps the most commercial song on the disc, but commercial based on its quality rather than an attempt to mold the song to a demographic. (GMA) Good Morning Again continues the musical reality in a piano-based ballad that is destined for mix tapes and probably some serious licensing agreements. Rhyme Or Reason has a deliciously dark tenor that stretches across the rhythmic framework of drum, bass and bruising guitar. Other highlights include Contain It, Remembering, Too Much and Moment.

Midnight To Twelve is an extremely capable rock outfit. I would guess from listening to Midnight To Twelve that the first three songs were heavily produced and managed to target musical/radio demographics, while the rest of the album was written in the spirit of the band. The delineation is very clear between attempts to be commercial and attempts to write music. Songs 4-12 are a first class album while the first three tracks are fairly typical modern rock formula songs that are listenable but not overly memorable. The fact of the matter is that Midnight To Twelve likely has more mass commercial appeal when they are writing for themselves than for a certain audience. A very strong debut either way.
Rating: 3.5 Stars (Out of 5)