Review: Ryan Calhoun - Everything That I'm Not 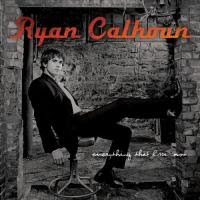 Ryan Calhoun - Everything That I'm Not
2008, The Ascot Club

Ryan Calhoun is a southern Californian who did his time in New York City and returned home. A young artist from what's called the Hotel Cafe scene in Los Angeles, Calhoun has shared the stage with Switchfoot, the Cary Brothers and Jack's Mannequin. His 2nd album, Everything That I'm Not hit the shelves in October of 2008. Produced by Bill Lefler (Gym Class Heroes, Ingrid Michaelson), Everything That I'm Not has that highly polished Indie sound that seems to be the taste of the moment, particularly on prime-time television.

Everything That I’m Not is a sharp collection of Brit-influenced pop/rock songs. Calhoun brings a strong melodic sense and easy harmonies to eleven songs full of big pop hooks and strong lyrical perspective. The album opens with Sometimes Sorry Is The Wrong Thing. It’s a catchy, upbeat tune with slightly depressing subject matter. Slipping Away has a similar motif. Calhoun has a cool, clear voice and a sharp vocal delivery that is reminiscent of Tom Landa of The Paperboys. His approach is very straightforward. Calhoun’s songs are confessional in nature. Right About Now finds Calhoun wearing his heart on his sleeve in a song with strong radio potential. The repetitive nature of the verse serves as a comforting reinforcement that lulls the listener in, making you feel like you’re part of Calhoun’s romantic angst.

Who We Are is something of a departure for Calhoun. The piano-based ballad is more personal and stripped down than much of the rest of the material on Everything That I’m Not. The simplicity works well, giving Calhoun’s voice a perfect chance to shine. Underneath is another great pop song with strong commercial potential. Expect to hear this song on prime-time television. My favorite song on the CD is Hope (“Do you ever feel like you’re all alone / And do you ever feel like you’re the only one who can feel the pain? But you act okay…”). The neurotic love of pain and loss will hits close to the human condition.

Ryan Calhoun has an easy-going vocal delivery that should play well to both radio and video. His heart-on-the-sleeve, depressive lyrics wrapped up in pop/rock candy is a recipe for pop music success. The theme has been done so many times in pop music and yet never seems to go out of style. Everything That I’m Not is a fine debut. Calhoun lays his psyche out in music for the world to see and hear. Check it out; you’ll like what you hear.

You can learn more about Ryan Calhoun at www.myspace.com/ryancalhounmusic or www.purevolume.com/ryancalhoun. You can purchase a copy of Everything That I’m Not at store2.bandfarm.com/ryan.
Posted by Wildy at 5:48 AM