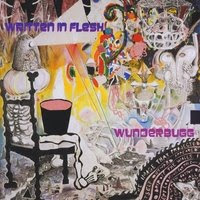 Wunderbugg - Written In Flesh
2008, Whidden Lee Flores
From the Emerald City came a band full of power and light, driven by all that was good in electronic music. They would raise up with improvisational tenor the bounds of music and lift the consciousness of all who heard them. And they would be called Wunderbugg. Wunderbugg is the dream child of keyboardist Whidden Flores, who conceptualized the band several years ago at the tender age of fourteen. Joined by pianist/engineer Nick Evans and MIDI/effects processing wunderkind Lorin Atzen, Whidden leads us though ethereal and sometimes concentric musical patterns on the Wunderbugg's debut album, Written In Flesh.

Mixing in the usual rhythmic devices, Wunderbugg goes for something of a live band sound between two players of the keys. The band has been building a significant buzz in Seattle as an Indie, and has garnered significant recognition. More importantly, Wunderbugg has quite a heady list of fans, including Deep Forest, Scum Of The Earth, Mike Garson (David Bowie, NIN) and Mike Koglin (Gatecrashers/Creamfields). They've managed to fill venues in Seattle that are generally beyond the reach of any Indie band.

I am not going to discuss highlight tracks in depth here, as each listener will find their own groove that they identify with, but I will say that Last Lullaby Of A Fallen Conquistador is sheer genius. The song manages to convey heart and emotion, things that are all too often lost in electronic music. This is the must sublime talent that Wunberbugg brings to the table - an ability to feel and live through their music. It is this talent more than any other that allows them to touch the listener.

Written In Flesh rises above the crowded pack of Electronic music releases in 2008 to declare that it’s something special. We recommend you listen. Wunderbugg is in fine form.

You can learn more about Wunderbugg at www.myspace.com/wunderbuggispimp. You can purchase a copy of Written In Flesh at www.cdbaby.cd/cd/wunderbugg.