Review: Underride - One Of Us 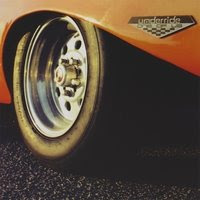 Underride are looking to revive the Seattle sound in their own image. Building on the legacy of grunge, Underride take it to the streets in a raucous and crazy fashion. Rev, El Barto, Double A, Rex Nomad and Pondscum put you in the mood to crank it up to 11, hit the streets and see what's cooking' The band's 4th release, One Of Us, aims to put them squarely on the American hard rock map with 14 songs of kicking-in-the-windows and doors rock.

Sounding a bit like Poison and a bit like Whitesnake, Underride brings back rock the way it was meant to be played. One Of Us plays like a bit of 1980’s hard rock/hair band memorabilia. Candy Girl is the sort of song that would have made for a great video in the early days of MTV. Full of big guitar hooks and big, harmony-filled chorus, Candy Girl is a hit that should have been. On The Radio follows in the same vein, bringing that 1980’s brand of hard pop back into focus. She Gets Paid takes a harder turn, toward a more driving rock experience (although still with a certain pop sensibility). Throw It Away sounds more modern, coming across as a modern rock anthem (ala Pearl Jam/Soundgarden).

Be sure to check out Kink In My Heart, with a great guitar hook you won’t be able to shake. Road To Nowhere would be a great concert tune, and is probably my favorite track on One Of Us. My Little Hell returns to the dark, driving guitar, and is currently my 2nd favorite here. Other songs of note are Lights Off Baby, Shotgun Breakdown (sounds like Ratt), Riot Stick and No Means No.

Underride deserve some serious credit here. The courage to play a style of rock that has gone out of vogue is rewarded in the fact that they do it so well. This is the sort of album that could rekindle an interest in the best hair-metal from the 1980’s. One Of Us is an absolute keeper. No low moments, no catering to pop radio with syrupy ballads or acoustic-based alt-rock divergences. Just pure heavy rock with a sense for hooks and great phrasing. You need to hear this.
Rating: 4.5 Stars (Out of 5)

You can learn more about Underride at http://www.underride.net/. You can purchase a copy of One Of Us at www.cdbaby.com/cd/underride, or you can download it from iTunes.
Posted by Wildy at 5:00 AM