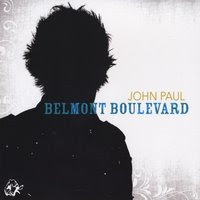 John Paul is well known to fans in New England. As the leader of Black Tie Affair he’s toured the East Coast, been a regular at clubs such as Paradise, The Roxy and Middle East Downstairs, and even played CMJ. Now based in L.A., John Paul lets his confessional songwriting style speak for itself, both on CD and on stage. His second solo album, Belmont Boulevard, features some heady talent: Brad Pemberton (Ryan Adams and the Cardinals); Dan Dugmore (Linda Ronstadt, James Taylor, Neil Diamond, Tim McGraw); Billy Mercer (Ryan Adams, Mindy Smith) and Jason Lehning (GRAMMY nomination for Best Engineer). Produced by Tom Acousti, Belmont Boulevard should open the eyes of a sleeping nation to the talent that’s been brewing in Boston.

Belmont Boulevard opens with 21, an energetic and jangly rocker with a memorable melody and great hooks. Chameleon takes on an Americana sound with quirky lyrics and an urgent energy that is infectious. Drink and Drive is a raucously bizarre song about love connections made under the influence. 45 may the most commercial rock tune on the album, with a slick sound and a catchy verse than ends in the line "don't make me kill you". Other highlights include Our Time, Come Down Girl and Sinkin' In.

John Paul brings great energy to Belmont Boulevard. He has great songwriting skills and has an enigmatic sound. Vocally the flaws that are present seem to provide a unique sound on the more upbeat tunes, but slow songs leave these flaws very exposed. Consequently I really didn't enjoy the slower songs here as much as the more rock oriented material. John Paul does have an affinity for great hooks and musical composition and will build a solid fan base. Belmont Boulevard is a good record with a couple of weak moments. Definitely worth checking out.

You can learn more about John Paul at http://www.johnpaulsmusic.com/ or at www.myspace.com/thejohnpaul. You can purchase a copy of Belmont Boulevard at www.cdbaby.com/cd/pauljohn2.
Posted by Wildy at 5:27 AM