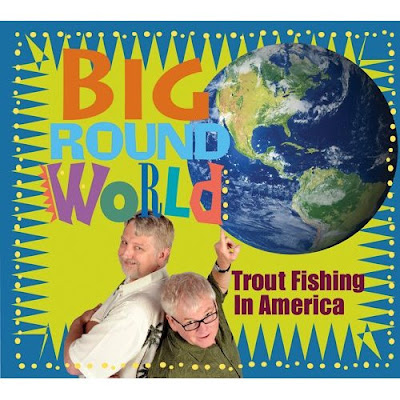 Sometimes it's easy to lose track of the fact some children's musicians are incredibly talented. As a parent with young ones, you can be subjected the same CD or same song hundreds of times over. The daydreams one can have where a CD flies majestically through the air, shimmering in delicious sunlight just seconds before shattering to bits against a rock or wall become the reverie of parents at times. It is incredibly refreshing when an act comes along who make music that speaks to children rather than speaking down to them. Trout Fishing In America are just such an act. This three-time Grammy nominated duo of Ezra Idlet and Keith Grimwood have traveled back and forth across North America many times over playing shows for kids, families and even the occasional adult show (their non-children's albums are amazing to hear). 2008 is a banner year, seeing Trout Fishing In America's 20th release, Big Round World. Several of the songs here were developed from songwriting workshops held with children, which allows the band to capture the perspective of some of their biggest (and littlest) fans.

Trout Fishing In America have always been based in a folk-rock sound and occasionally add other flavors. On Big Round World there's a slight Afro-Pop lean, and the end result is a sound that is immediately comfortable and full of energy. Both Keith and Ezra are very capable singers and instrumentalists. They have a talent for tuneful songs that easy to sing along with. Their collective sense of humor pervades their writing and you won't find a more authentic, honest stage presence anywhere. I had the opportunity to catch one of their shows a number of years back and their rapport with the kids in the crowd was amazing. The most amazing part of that show was realizing that the only way to differentiate the kids from adults was size. The adults were as into the show as their children.

Big Round World (the album) keeps up the tradition of great songwriting. Big Round World (the song) has a vaguely Celtic feel to it and seeks to expand the horizons and imaginings of the listener. My Favorite Jeans is a song that children of all ages can appreciate and had its genesis in one of the children's songwriting workshops mentioned above. A Tiger And A Monkey And Me is a fine example of the fantastic use of imagination that Trout Fishing In America can call into reality in their songs. In four minutes they manage to capture the wonderful gestalt of layering the pretend world of young folks over the reality of everyday.

Martin Luther King & Rosa Parks is a tribute song that was also a product of a children's songwriting workshop. Fourth graders at Sonora Elementary School in Orange County, CA came up with the ideas that drove this musical history lesson and homage. The song craft is undeniable, and for a subject song with educational tenants it's amazingly un-cheesy. Other highlights include the humorous Too Good To Be True, Always Chew Your Food, The Alarm Clock Rings, There's A Rumor Going Round and It Must Be Halloween.

Big Round World is a first class offering from Trout Fishing In America. The kids will love it, and adults won't feel embarrassed if you're caught listening to it without the kiddies around. Trout Fishing In America are successful because they somehow remember (or perhaps have never forgotten) how to see the world through the eyes of a child. Their music appeals to so many because we all want to remember. Big Round World is (in a first for a children's album) a Wildy's World Certified Desert Island Disc. Don't miss it!

You can learn more about Trout Fishing In America at http://www.troutmusic.com/, where you can purchase Big Round World and many of their other fine recordings. They’ll even autograph it for you free of charge! You can also find their CDs at stores such as Barnes and Noble, Borders and FYE. And yes, they’re on iTunes too!
Posted by Wildy at 6:39 AM