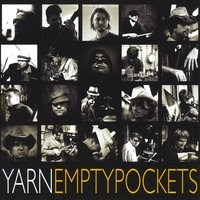 Brooklyn may be the true musical melting pot of American culture. You can find literally any style of music you could possibly want there. A majority of the musicians you see playing in Manhattan throughout the week are slogging down the D or F lines back home to Brooklyn after their shows as it is. Yarn is a product of Brooklyn's melting pot. Purveyors of some of the most reverent country/folk story songs you're likely to hear, Yarn has attained a level of musical alchemy where their songs become metaphysical experiences you live through. On their 2nd album, Empty Pockets, Yarn offers up 15 examples of golden Americana songs.

One way to identify a band that has something special is to take a look at the sort of people that are willing to be associated with their records. If you see a single name artist sitting in an up-and-coming band it may mean they are really good or it may just mean they share an agent/publicist/friend/family member who called in a favor. When you start to see multiple guests with names you recognize it's a sure sign that something is cooking on that 1.5 mm thick piece of plastic. Empty Pockets features Caitlin Cary (Tres Chicas, Whiskeytown); Edie Brickell (The New Bohemians, Mrs. Paul Simon); Tony Trischka (banjo god) and Casey Driessen (The Sparrow Quartet).

Empty Pockets opens with Can't Slow Down, a song about how the drive for excess can become all consuming. Yarn plays with exquisite energy and heart throughout, and Can't Slow Down is a perfect introduction. Blake Christiana has a folksy voice that is tough yet tuneful and a very comfortable listen, and Andrew Hendryx is one of the meanest mandolin players this side of Nashville. Trevor MacArthur, Rick Bugel and Jay Frederick round out one of the tightest and more vibrant bands I've heard in some time.

The title track, Empty Pockets is a classic country story song, like something you might have heard from the late Rick Nelson. The song examines love gone bad, and shows some of the lyrical touch that Yarn displays throughout: "I'm two sheets to the wind and I'm callin' on the bar again". Other highlights include More; I'm Down (featuring Edie Brickell in a duet); Christopher Street (which perfectly captures the mood of the street of the same name in lower Manhattan); I've Already Won; You Don't Love Me Anymore and Roadhouse.

I want to bring special attention to the song Lies I've Told. This may be one of the most well-written songs I've come across. It's a lyrical masterpiece and the musical setting is amazing. Christiana is in perfect voice here. This is a song for the Great American Songbook and I would predict it's the sort of song that other artists (big name artists) are going to want to cover. Lies I've Told is a musical crescendo that rises above what was already an outstanding album.

Yarn is something special. They're not flashy, but they make honest music with a singular beauty. Yarn has a talent for lyrics that are nearly conversational, like a great story teller who tells you a story by involving you in it. The band is incredibly talented and professional, and a little bit inspired. Empty Pockets is going to chart somewhere, and don't be entirely surprised if one or two of these songs break through into the mainstream country market. For Yarn it's not a matter of if, but when. Empty Pockets is a Wildy's World Certified Desert Island Disc and a must have for any music fan.

You can learn more about Yarn at http://www.yarnmusic.net/ or www.myspace.com/brooklynyarn. You can purchase a copy of Empty Pockets at www.cdbaby.com/cd/yarn2.

'Can't Slow Down' is so obnoxious that I had to search it and vent.
I gotta listen to that crap on ESPN of all places.
SUCKS