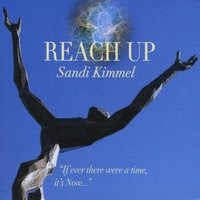 Reach Up opens with New Song, a post-hippie 60's folk/pop song that sounds as if it would be as at home at Falcon Ridge as it would have been at Woodstock. It's a bit hokey in its abjectly positive message but kind of charming for all of that. For Goodness Sake discusses the benefits of making movies in your mind as a positive step towards actualizing your potential. The theme appears to be the sort of positive thinking draws positive events philosophy known generally as The Secret. My Nature continues this sort of pop psychology self-help positivism.

Breathe continues with the visualization theme ("breathe in the future, breathe out the past") in a thematic concept that could almost be funny but for the fact that Kimmel appears to be trying to proselytize based on these bits of musical fake-it-til-you-make-it ideals. What is most interesting is that the music on Reach Up is good. Kimmel is an adept composer. While nothing truly outstanding rears its head here, the songs are very listenable from an instrumental perspective. Vocally, Kimmel is an acquired taste. She has a pleasant tone in her voice, but the heavy vibrato combined with a virile alto make for a slightly uncomfortable listen at times.
Women Are Weaving is an inoffensive tune that left me wondering what the underlying message was about. The premise is very clear on its face and appears to be a very inline with the 1980's concept of women getting in touch with their inner goddess. The implication is a humanistic implication that the world is shaped and structured by women, making nature, deities and the other half of the species spectators in the human process. It makes me wonder if I missed something.

Grace (Let It Flow) is another pretty composition that is drawn back by the lyrical content. It's full of cliché and overly simplistic lyrics that turn a pleasant listen into a bloated spectacle. This seems to be the tendency throughout Reach Up. Sandi Kimmel has a message she wants to get out and has chosen music as the vehicle to disseminate her ideas, but the music and the message don't seem to mix so well. It's as if the music that Kimmel writes (well) has its own ideas about what it wants to be. Sandi Kimmel is the over-involved parent who takes every step (lyrically and thematically) to make sure her children (songs) become what she intended. Because the songs aren't allowed to follow their own paths they become diminished under the burden of Kimmel's message.

I would love to hear one of two things from Sandi Kimmel: The first would be an instrumental recording. I really believe Kimmel has a talent both for composition and as a musician. The melodies and song structure on Reach Up are memorable and interesting and insinuate themselves into your brain. Vocally I am not a fan of her voice but we'll chalk that one up to personal taste. Lyrically I struggled with the album because it has the feel of a hymn book from the church of The Secret or Pop Psychology or whatever you want to call it. So the verdict is that musically this album is great, probably a 4 out of 5 Stars. Lyrically and vocally Reach Up is an uncomfortable fit. Overall, Reach Up is probably most recommended for those who adhere to pop psychology self-help mantras, Tony Robbins acolytes and Woodstock holdouts.

You can learn more about Sandi Kimmel at http://www.sandikimmel.com/. You can purchase a copy of Reach Up at www.cdbaby.com/cd/kimmel08.
Posted by Wildy at 6:28 AM