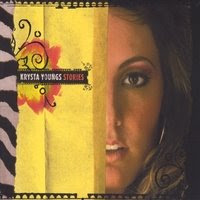 Krysta Youngs is a product of Detroit who has spent the last six years in Boston. She has developed a reputation as a candid, articulate pop-songwriter with and edge. A strong talent for storytelling and the ability to craft rock-oriented pop confections that are as welcome on the stage as in the nightclub has created a significant buzz around Youngs. Her debut album, Stories consists of fifteen songs full of stirring, in your-face lyrics and a pop savvy that would turn Madonna green with envy.

Stories opens with Once Upon A Situation, a spoken word piece to music that leads into It's Going Down. It's Going Down has top-40 dance single written all over it. Dance beats and driving guitar in the chorus urge you to get your feet moving. Leave Me Alone is the most confrontational song on Stories; a lyrical scream for space in an enclosing life. Silly Lives is one of the finer displays of Youngs' songwriting talents. This is a pure pop song that would have sounded entirely at home on a Dawson's Creek soundtrack. Youngs' sultry voice helps to spark the atmosphere here as well, creating a sensual comfort in the overall sense of disconnected grace.

Sophia opens as a gorgeous piano/cello duet and becomes a confessional song about the loss of a relationship. Youngs projects Sarah McLachlan here in style, but the voice and tenor is entirely her own. The title track, Stories is another pure pop confection that could almost cross over to R&B as well as pop/rock. Be sure to check out Untold and Impossible as well. Youngs ends with a remix of Untold by George Vala.

Krysta Youngs is a talent. She has a strong pop sensibility, an ability to write interesting and lyrically intense songs, a look that works for television and a toughness that stands in stark contrast to her moments of vulnerability. Stories is a revelation. With the right breaks, you're looking at/listening to one of our next major pop divas. And she's good enough to survive the inevitable fall from that position to singer/songwriter as time and wisdom overcome novelty and beauty. Don't be surprised if Krysta Youngs makes an inpact on more than one generation.

You can learn more about Krysta Youngs at www.myspace.com/krystayoungs. You can purchase a copy of Stories from www.cdbaby.com/cd/krystayoungs.
Posted by Wildy at 5:10 AM