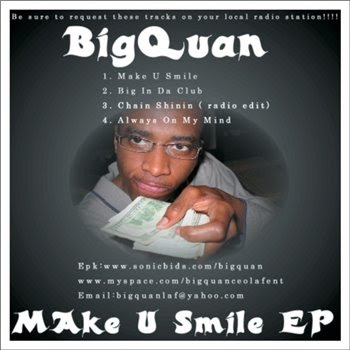 From Brooklyn to Utica, NY, and from Montego Bay to LA, Laquan Johnson (AKA Big Quan) has had his eyes on the prize. Big Quan has been rhyming now for eight years, and has more to his style and substance than your typical gangsta rapper. As I write Big Quan is in the process of wrapping up his debut album, but Make U Smile is already generating significant spins on college radio. Having already been a runner-up in the February 2008 round for VH-1’s Song Of The Year, and a quarter finalist in the 2008 Fight Klub – FK Anthem Contest, Big Quan is generating a lot of buzz in the music industry. He may just be the next big thing.

Big Quan is poised to turn the worlds of hip-hop and rap on their collective heads. With intelligent rhymes that are crisp and sincere, Big Quan stands to lead rap into a new generation of fans. Big Quan is infectious; it's very clear he's in this for all the right reasons. Big Quan is having fun making music, and hailing from Utica, NY he might be one of the first artisans of rural rap. Make U Smile is a collective shout out to his family and friends. It's peppy and positive but is not shy in language or tenor. Big In Da Club is very danceable and is probably destined to be self-fulfilling. Chain Shinin' has a nasty bass groove and probably will win an award for best use of the word cauliflower in a rap song. Again, Big Quan is literate and thoughtful covering material that many have rhymed with much less elegance. Always On My Mind uses rhythms and samples to create a sugary hip-pop confection to support Big Quan's rhymes, which constitute a love song in metered words.

Make U Smile is a plus effort and a great introduction to Big Quan. There are easily two (and possibly three) songs here that have significant commercial potential. Always On My Mind is the bubble song here, only because the supporting vocals sound like something Ross Bagdasarian might have recorded. A different vocalist on those supporting vocals and this song joins Make U Smile and Big In Da Club as potential hits. I suspect that Big Quan is going to be a monster. A year from now everyone will know his name. For now, readers, you are some of the few, the initiated. If rap is your thing, catch on to Big Quan now.

You can learn more about Big Quan at www.myspace.com/bigquanceolafent. Contact Big Quan through his MySpace page for purchase information for Make U Smile or other singles.
Posted by Wildy at 5:20 AM