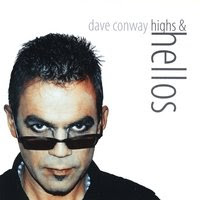 Ireland's Dave Conway is already known as the front man of Dublin's Trip Hazard. His sense of eclectic and quirky songwriting will come as a surprise to no one who has heard him over the years. Drawing on musical styles that are as musically disparate as they are separated by years, Dave Conway writes like a DJ creates, sowing together the seeds of pop greatness from different generations to create his own hybrid: New and interesting yet starkly familiar. Dave Conway released his debut solo disc, Highs & Hellos in August of 2008 to much positive press in Ireland.

Highs & Hellos refuses to take either the high road or the low road, instead choosing the un-hewn path that runs between them. If David Bowie were covering the Housemartins it might sound something like Highs & Hellos. Maybe. What Dave Conway is able to do is to present his ideas, both mundane and musical; in perspectives and deliveries you didn't consider but realize you should have. All The Time is crazy, fun and driven. It's the perfect introduction to Conway, hearkening back to the sort of new wave pop brilliance that came out of England in the mid-1980's. Leaving has an arena-rock feel to it and would have been very much at home in the late 1980's or early 1990's.

Deceived By Ecstasy is far and away the class of the album. It is an introspective and warm song paints a tangible picture for the listener. Spin A Bottle is a very close second for top track. It's perhaps not as deep as Deceived By Ecstasy, but has a melody that just won't quit, even under duress. Other highlights include Always, Helpless and Doing My Best.

Dave Conway has a strong pop sensibility that is hidden in the dark shadows of his music. He's the type of singer/songwriter that you have to listen to. Casual listeners probably won't get him, although they might get drawn in by some of his better material. Those who really listen to Conway get rewarded big time. He's a first class talent, and Highs & Hellos is a very strong debut CD. Definitely something to put on your to-do list.

You can lean more about Dave Conway at www.myspace.com/daveconwaysolo. You can purchase a copy of Highs & Hellos at www.cdbaby.com/cd/daveconway.
Posted by Wildy at 5:41 AM