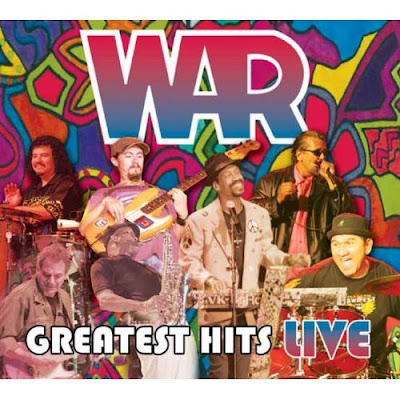 WAR began as The Creators in Southern California in 1962. In 1969 The Creators joined forces with Eric Burdon (Eric & The Animals) to form WAR. The ever-volatile Burdon would only stay with the band through 1972, but WAR would go on to become of the most influential Rock/R&B hybrid bands of the 1970s. While only one original member (Lonnie Jordan) is still in the lineup, there is no doubt that WAR remains incredibly influential and commercially viable in the twenty-first century. 2008 sees the release of Greatest Hits Live, a 2-CD collection of 14 of WAR’s most memorable and influential songs in the environment where they’re best – on stage.

WAR combined rock, funk, jazz, Latin, R&B and even reggae in ways that one before them dreamed of. Rising out of the ghettos of Los Angeles, WAR always had an appreciation of and love for diverse musical styles and cultures. It was WAR’s ability to meld all these sounds and influences into dynamic rock and roll that helped WAR appeal to so many people from different backgrounds in the 1970’s. Greatest Hits Live captures the cream of WAR’s crop under the lights of a live stage. The love flows freely from WAR to the crowd and back throughout the recording, and it’s easy to see why. WAR will always be known for the ironic and cheesy Lowrider, but songs like The World Is A Ghetto, Galaxy and Me And Baby Brother have visceral connections to time and place for folks who lived through the 1970’s. For those of us who either missed the 1970’s or were too young to notice, WAR’s set list reads like a musical collage of 1970’s atmosphere, culture and essence.

Galaxy is a funk rock tune with some great jamming in the middle. Ballero brings in a Latin influence that’s infused into some of WAR’s writing, and has a very mellow feel to it. Everyone knows Lowrider, but also on the list of national consciousness is the campy hit Why Can’t We Be Friends? This song is delivered in all of its sunny glory not only as an homage to the past but also as an incredibly relevant message for 2008. Other highlights including Me And Baby Brother, The Cisco Kid, Gypsy Man and Spill The Wine make this set very much worth plunking down your hard earned cash for.

WAR inspired an entire generation of rock and R&B bands, and has even influenced a generation of hip-hop/rap artists. WAR continues to perform 150 or so dates each year and has sold over 50 million albums to date. They’ve also been nominated for induction on the 2009 Rock and Roll Hall Of Fame ballot. Not bad for a group of guys from Long Beach. WAR’s Greatest Hits Live not only offers a fine collection of some of WAR’s most influential and innovative songs, but also offers the opportunity to sample their on-stage wizardry. It’s a must listen.

You can learn more about WAR at http://www.wartheband.com/. You can purchase a copy of Greatest Hits Live at Amazon.com or wherever music is sold.
Posted by Wildy at 5:05 AM

The Lowrider Band has four of the original members and is a much better representation of the band.

See why War should be in the Rock Hall