CD Review: Mutlu - In The Hear And Now 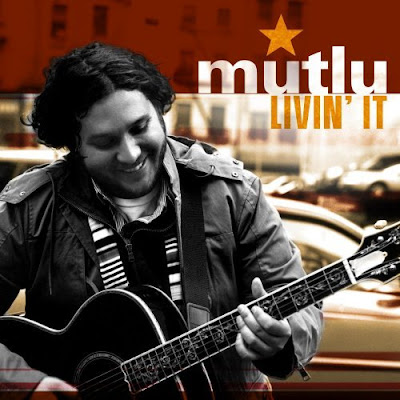 Philadelphia may not hold the trademark on soul music, but if not it's merely an error in accounting. Philly's history with soul music is as rich and hearty as a sandwich from Pat's King Of Steaks. In the here and now that history is represented by the likes of Darryl Hall, G. Love and Amos Lee. But the waters run deep in Philly, and there is a new generation of soul-influenced musicians on the horizon. Perhaps the first and brightest of the next wave is Mutlu. His brand of acoustic soul, dubbed "Rhythm and Folk" creates excitement wherever it's played. Mutlu's voice is as smooth as sweet tea and he has a talent for both melody and lyrics. His 2nd CD, Livin' It, was released by Manhattan Records in July, 2008. You need to check this out.

Mutlu brings a collaborative style to his recordings, similar to that adopted in the hip-hop and rap worlds. Consequently you'll see a number of guests on Livin' It. This allows Mutlu to expand on his muse through the variety of musical interplay. The result is a gorgeous and vibrant album that has the heartbeat of the street and sufficient sonic candy to keep you listening. Livin' It (the title track) is the most commercial and probably weakest song on the album. I suspect that in a stripped down form it would be more enjoyable, but the song has been produced to meet a contrived market sound to entice radio play rather than letting it become what it wants to be.

See What It Brings, on the other hand, is the beginning of the rest of the album. Here we hear Mutlu in his own voice along with the legendary Darryl Hall. The message is uplifting and particularly poignant for these troubled times. See What It Brings is "less commercial" and likely much more commercially viable than the title track.

My favorite track on Livin' It is Hello Morning. This is a classic song that I suspect will be licensed from here to Hollywood and back before it's done. The melody is the sort of magical ditty that you'll still be humming years from now even if you can't quite place where it came from. Upside is a close second, bringing an upbeat Rhythm and Rock sound that is strongly marketable and highly enjoyable. Other highlights include Shaky Ground (featuring G. Love); Make It There (featuring Amos Lee); Mama's Not Comin Home and In Your Heart (featuring Raheem De Vaughan).

Livin' It is the sort of album you launch a career on. Mutlu's musical alchemy is likely to be with us for some time to come. His ability to pack big thoughts into concise and poetic lyrics, match them with memorable melodies and lush arrangements indicate the sort of potential you buy stock in. Livin' It is amazing. I highly recommend you give it a listen. And while I haven't heard it (yet), I recommend you check out his self-titled EP before it's selling for ridiculous sums on eBay.

You can learn more about Mutlu at http://www.mutlusounds.com/. You can purchase a copy of Livin' It at Amazon.com or most major music retailers.