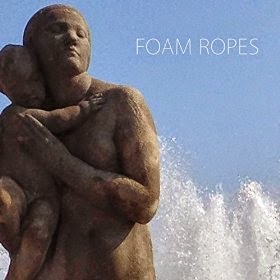 Derek Nicoletto, the former front man of Telling On Trixie, stood at a crossroads in his life: he walked away from his lifelong pursuit of music to pursue acting through an exclusive theater program.  Rather than this becoming a new path, the breaking down and building up of the stage has led Nicoletto back to music with a new fervor and a new understanding of self as a creative force.  Nicoletto returns this week under the name of Foam Ropes, with a self-titled album made up of smooth rock and pop.

Foam Ropes opens with “Truth In Fables”, a tuneful self-exploration informed by the human tendency to hide the truth in our own personal narratives.  It’s a compelling mea culpa, of sorts, full of a dramatic flair and a gentle yet persistent guitar-driven arrangement.  “Potion Me Well” has an edgier, more muscular guitar sound that would be at home on old-school AOR stations.  Think a cross between Canadian rocker Kim Mitchell and Billy Squier.  Foam Ropes goes for a pop inflection on “Telescope”, a wordy yet accessible paean to fear and inertia.  This is a radio-ready gem; upbeat and catchy yet melancholy all at the same time.

“On Celery Road” is a tasty little rocker that gets your feet moving with a bright in spite of the darkness sort of sound.  Nicoletto digs into the vocal here for all he is worth, and the performance is stunning.   The mood lightens on “You Make Loving Fun”, with Nicoletto exploring the natural high of love.  This is perhaps the weakest vocal on the album, but the heartfelt nature of the song makes it all good.  Even the easy sway of the guitar solo highlights the carefree nature of the moment.  Nicoletto explores the uncertainty of relationships on “Birches” in a dark and tempered pop rocker.  “Beauty Number Nine” is a dark rocker with a light message.  Foam Ropes creates a sound here that would be very much at home on Edge or Classic Rock radio formats.  “Bad Apples” hearkens back to 1960’s ballads, and is dappled with a wonderfully reverbed guitar sound.  This is among the best writing on the album.  Foam Ropes reprises “Telescope” to close out the album, showing the other side of inertia and fear; opportunity and hope.

Derek Nicoletto has certainly grown as a songwriter since his time with Telling On Trixie.  There is more subtlety, nuance and range evident in the songs on Foam Ropes, and the band has a sound that is certainly marketable in this age of disheveled musical genres.  The songs on Foam Ropes could find their respective ways to various radio formats as well as to a number of licensing opportunities.  From the listener’s standpoint, Foam Ropes never stands still.  There is a constant evolution of sound as the album progressives, and you will be pushed along with the rush.  This is a great start.

Learn more at www.foamropes.com.  Foam Ropes is available from Amazon and iTunes.
Posted by Wildy at 6:49 AM