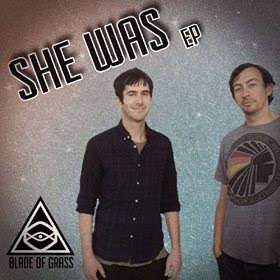 Blade of Grass is a minimalist, post-rock electronic duo from Los Angeles.  Josh James and Mike Hurst combine electro, rock, surf and world music influences to craft simplistic yet intriguing arrangements that serve as a bed for Josh’s vocal melodies.  The band released two singles as a two-song EP in the summer of 2014 entitled “She Was”.  While the EP doesn’t give a clear sense of the duo’s musical direction, it does serve as an intriguing introduction.

Blade Of Grass kicks things off with “She Was”, a droning post-pop ode to love lost.  This one is likely a love/hate proposition for listeners.  Josh James sings with a droning, nasal quality that affects the low-speed angst of remembered heartache, while a minimalist electronic arrangement counts the slow passing of time.  This will either connect or it won’t, but it is well and artfully done.  “Who You Gonna Run To” is likely to have more general appeal, with its mellow vibe and pure vocal line.  The simple arrangement is appealing, with a more readily apparent musicality than the previous track.  James’ voice is more appealing here as well, presented with a softer edge.

Blade of Grass isn’t going to appeal to everyone, but there’s a unique muse at work here.  She Was is an intriguing introduction to a duo with a lot, perhaps, to say, but whatever they say is going to have their own distinctive musical pizzazz.  I can’t guarantee you will like everything you hear, but there’s enough artistic juice here that you’re bound to respect even that which you do not find a feel for.

This one is a keeper.

She Was is available from Amazon or iTunes.
Posted by Wildy at 6:45 AM