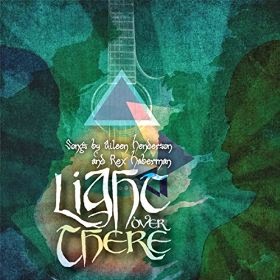 The ubiquitous nature of the internet has allowed for artists who might never otherwise meet to connect and make some great art.  Perhaps none of those stories is as intriguing as the one behind Light Over There.  Rex Haberman is a musical veteran, with two solo albums, a duo album a series of EPs with socially progressive rockers War Poets.  Aileen Henderson is an 18 year old resident of Galway, Ireland.  Haberman Aileen Henderson met via Twitter in 2014, and still have never met face to face. Nevertheless, they have begun a writing and recording partnership that is bound to catch your ear.  The duo, with the help of a handful of Nashville musicians, recently released their debut EP, Light Over There.

Light Over There kicks off with “Where Memories Live”, a solid Americana rocker with a good voice and the wonderfully enigmatic lead vocals of Aileen Henderson.  The song tackles the subject of dementia and the devastating impact it has on families.  In spite of heaviness of the subject, there’s a lightness and energy to the guitar-driven arrangement that reflects love for the passive protagonist.  This energy carries over to “She Cries To You”.  The juxtaposition of Henderson’s reserved yet dynamic voice and the up-beat rock arrangement is reminiscent of some of the better work of the Cowboy Junkies.  You’ll have a hard time shaking this song; it will follow you around for a few days, popping into you head at the most random moments.

“I Ain’t That Bad” is a low-key duet between Haberman and Henderson that’s well meant but perhaps doesn’t work quite as well as expected.  The arrangement has a country-ish Gin Blossoms feel, but there’s little vocal chemistry between Haberman and Henderson, and the gap is something of a distraction.  “Solitude, Gratitude” is another solid, low-key rocker, but Henderson’s vocal energy just isn’t this one.  Her voice is pleasant enough here, there’s just no oomph in the performance this time around.  Light Over There closes out with “Mountain Song”, by far the standout track on the EP.  It’s catchy, yet understated, and makes a brilliant showcase for Aileen Henderson’s voice.   Everything clicks here.

Light Over There chose their name as a reflection of the wonder of two musical kindred spirits finding one another across the vastness of the Atlantic Ocean (or the internet).  That inspiration is apparent on Light Over There more often than not.  The disconnect of recording in different places at different times does show up at times, but the band generally does a very good job of bringing an organic feel to the songs.  It will be interesting to see how the project progresses over time; working face to face will likely help Haberman and Henderson find the deeper roots that are apparent from the music on their promising debut.