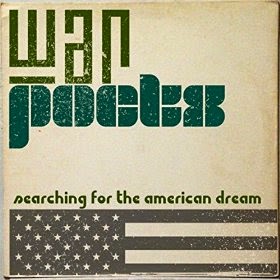 Minnesota rockers War Poets have been busy in the last year.  Their most recent release, Searching for the American Dream, is the third in a cycle of three EPs the band has released in the past nine months.  The cycle is a series of rock and roll meditations on issues faced in modern American, as seen through the politically jaded eyes of the Occupy movement.  Searching for the American Dream is the cycle’s culmination, referencing issues of incarceration; income inequality; respect for prostitutes; and revolution.

The EP opens with “Day Dream”, a compact little rocker with smooth edges.  The song is mildly catchy and will appeal to fans of classic rock.  The lyrical content is awkward but consistent with issues addressed in the television show American Crime.  “Shadows” is a clumsy humanistic take on redemption.  It’s a great listen musically, but the disconnect between sound and lyric may be tough to take.  “On My Own” is a classic rock biograph of a homeless man who experienced child abuse; ran away and grew up on his own.  The song is well written, and the sound references Pink Floyd or perhaps post-DeYoung Styx.

“Sarah” is a song of affection for a prostitute that looks to remove the stigma of the world’s oldest profession.  It also works as an atypical love song if you’re not listening to the words too closely.  “Pay The Piper” is all about income inequality and revolution.  This is perhaps the standout track on the EP; featuring a tremendously catchy arrangement.  Searching for the American Dream winds down with “Hey There”, a middling rocker about the pursuit of happiness and love.

War Poets are musically competent on Searching for the American Dream.  The band is musically in sync and wears their progressive social management views on their collective sleeve.  The message, whatever you might think of it, is ineptly delivered more often than not.  This is a mixed bag that will have some regional appeal but just doesn’t have enough universal appeal to break big.

Learn more at www.warpoets.net.  Purchase Searching for the American Dream from Amazon or iTunes.