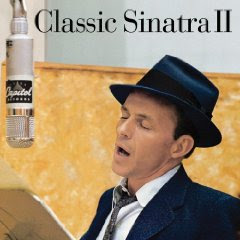 It seems that the traditional music industry survives these days by re-packaging music fans already have and throwing in one or two tidbits they don’t. The latest example is Frank Sinatra’s Classic Sinatra II, due June 2, 2009 on Capitol Records. The album is drawn from Sinatra’s concept albums recorded for Capitol between 1954 and 1961 plus a handful singles, and of course, one previously unreleased track. So for a list price of $18.98 you can get twenty songs you may already have and one you don’t. If you’re into renting your music (digital downloads), this presents no problem, you can simply download the new song. If, like me, you prefer to own your copy, you’ll have to lay down the cash for the CD if you want the new track.

All of that being said, Capitol has put together a pretty nice collection in Classic Sinatra II. The set features some big hits from that era, including Love And Marriage; High Hopes and (Love Is) The Tender Trap. Also included are standards such as Pennies From Heaven, Moonlight In Vermont, All Of Me, Love Is Here To Stay and Just One Of Those Things. Of course, if you’re a big-time Sinatra fan then you’ll buy the album just to have This Can’t Be Love, which has not been previously released. The song only clocks in at 1:40 and is over pretty much before you know it, but reflects Sinatra singing with a big band and in perfect form.

If you’re a Sinatra fanatic, you’re going to go buy this CD no matter what anyone says. If you don’t really know a lot about Sinatra and want to be introduced to his music, Classic Sinatra II is a great place to start (and I would suggest supplementing it with Classic Sinatra (1953-1960), the 2000 release also on Capitol Records. It’s a great collection, but it really depends on how much of this material you already have and whether you have to have that new song…

You can learn more about Frank Sinatra at http://www.sinatra.com/. Classic Sinatra II is due for release on June 2, 2009. You can purchase a copy of Classic Sinatra II at Amazon.com, or you can download it through Amazon MP3.
Posted by Wildy at 5:00 AM

Why is there no archival information on "This Can't Be Love," the supposed bonus-track on the Sinatra Classics II CD? The linr notes don't say when it was recorded or where. Or for what Capitol album, if any. It does list an arranger totally unfamiliar to me. I don't believe he ever arranged for a Sinatral studio album at Capital. Could this have been a song prerecorded for one of Sinatras TV shows from the 1950s? It doesn't sound like any other the other tracks from the album.