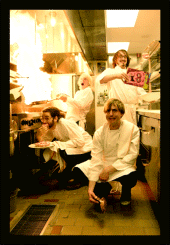 In April of last year we reviewed Woodward’s full-length debut, …But Your Kids Are Gonna Love It, with raving words and manic glee. The album came in at #3 on Wildy’s World’s Top 40 Albums for 2008. In May of 2009, the band will release three new singles through iTunes and other download services. Switch Hit Resistor, Footski and Love Heart represent a growth in sound and style for Woodward, beginning with the retro/modern classic rock sound Detroit’s Fab Four propagated on their debut, Woodward has taken a more linear, melodic approach to songwriting this time around. The result is consistent in style, but perhaps just a bit more refined than in the past. Where modal triad harmonies in the classic, arena rock style were the rule before, now they are a bit more complex and developed in conjunction with an expressive harmony line. It’s almost as if Woodward took their old sound and blended in just a touch of 1980’s New Wave aesthetic to find a sound that is viably modern while staying true enough to their roots to please long time fans.

Switch Hit Resistor is perhaps the closest to the old material, although the synth lends that New Wave feel to the song. Footski sounds a bit like Elvis Costello recording with Queen, and sounds like a potential summer hit. This is the sort of song you hear driving in your car and crank the volume up as loud as it will go. The pop sensibilities that Woodward showed on their debut have not deserted the lads. Love Heart is a bit more introspective that anything you might have heard from Woodward before; I wasn’t sure about this one on first listen, but as I’ve listened to it more and more I really like it. Love Heart is subtly and intelligently written and has a chorus that just won’t get out of your head.

So times are changing. Woodward shows distinct growth on their new singles without sacrificing the essential character or sound that has enchanted fans to date. If anything, the artistic and sonic growth is going to make Woodward a lot of new friends. Woodward stands for the type of Rock N Roll that has been missing from the popular scene since Grunge exploded out of Seattle almost twenty years ago. Bands like The Killers and The Fray have tried to resurrect melodic, retro/modern classic rock with varying degrees of success, but no one in the mainstream has done it as well or as emphatically as Woodward. Make sure you check out their new singles, Switch Hit Resistor, Footski and Love Heart when they become available later this month.

You can learn more about Woodward at http://www.woodwardtheband.com/ or http://www.myspace.com/. The singles Switch Hit Resistor, Footski and Love Heart will be available some time in May on iTunes and several other online vendors.