Review: Sound Liberation - Open Up Your Ears And Get Some 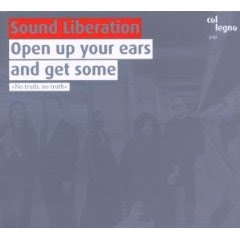 Sound Liberation – Open Up Your Ears And Get Some
2008, col legno Beteiligun

New York City’s own Sound Liberation isn’t just the name of a band, but a musical philosophy that runs all through their second album, Open Up Your Ears And Get Some. Classical, Jazz, Rock, Rap, Folk and anything else you can find in the musical cupboard might just show up in one of the thirteen tracks presented here. Sound Liberation has been together since 1996, playing such venerable NYC clubs as Joe’s Pub, The Cutting Room, The Knitting Factory and The Blue Note. They’ve also played some prestigious gigs around the globe, including the Blaine Jazz Festival (Blaine, Washington); the Etna Music Festival (Catania, Sicily); The Outreach Festival (Schwaz, Austria) and the Peekaboo Festival of New Music and Theater.

You just can't put a name or definition on what Sound Liberation does on Open Up Your Ears And Get Some. Listeners who don't know the score will come away thinking Sound Liberation is the most unfocused band they've ever heard. I picture the members of Sound Liberation sitting around in a musical writer's circle playing musical truth or dare, because no genre boundary is respected or detected here. Violin and cello intermix with electric guitar, flute, drums, bass and a host of other instrumental touches to create a recording as alive as creation itself. The album opens with Prelude 21st Century, a funk laden Baroque Rock instrumental that sounds like it might have been culled from an old silent film and married to its more modern elements. Which Of The Days is a hard-core rap tune done in organic instrumentation including Jethro Tull style flute riffs. Ashes' early moments revolve around a bass/cello duet that sounds like the product of a Steve Howe/Yo-Yo Ma collaboration.

Sound Liberation gets to rock out a tad with Oh Come To The Window, complete with lyric Italian vocal line. Like I said, no boundaries respected or detected. Be to check out Mozart and 21st Century Klezmer, one of the oddest and most amusing pieces I've heard since starting this blog over a year ago. Other highlights include the impressionist flavor of Infinity, the faux Flamenco of Unutterable and the Techno flavored Let Go Of My Soul.

Sound Liberation creates a widely variable and original tableau on Open Up Your Ears And Get Some. You can't help but be intrigued by such an ambitious and original cycle of songs. Even if you end up not liking the album, you won't feel cheated. Sound Liberation always keeps things new and interesting.