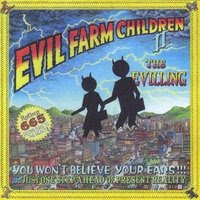 When Evil Farm Children step on stage it’s like introducing alcohol to a party, literally anything can happen. The Ottawa, Ontario, Canada power trio segue from Punk to Surf to Metal to Americana like runway models change their outfits and nothing ever sounds out of place. Dave Kerr (DeadBeatDads, WizzleTeeth) plays guitar and sings on most tracks, while Janice Fitzsimmons (The Ambassadors, Revv Engine) plays bass and sings; Jeb Bond (The Restless Virgins, Screaming Bamboo, Fenton Brothers, Purple, Evil Knievel, Tall, Freudhammer) beats the skins and keeps Evil Farm Children on track. Any of the three members might be musically impressive, but when they come together as Evil Farm Children something special happens. 2008 saw the release of their second album, Evil Farm Children II: The Evilling, which raises the bar from their self-produced debut EP Knuckleduster. When playing live EFC has been known to cover such diverse artists as Dick Dale, Black Sabbath, Tom Waits, Conway Twitty & Loretta Lynn, Link Wray or Alice Cooper. Their original material is as unpredictable and fun to listen to. You’ll come to the conclusion that either they’re mad, or Evil Farm Children is a product of collective genius. We’re not ruling out either one.

The Evilling opens with Code Of Silence, a classic surf guitar rock song with a hint of rockabilly swing, like something from a Ventures session. Border Blaster follows a similar retro vein, getting back to Roots Rock N Roll in a classic party song. Booze Can is an interesting Garage/Punk/Surf hybrid that its feet firmly planted in the 1960’s. Much of the material here is fun to hear on CD but seems like it would be much more vibrant live. Valley Justice is interesting; written like a trail rider’s song to the slow beat of a plodding horse. The song has a dark and vaguely ominous quality with a bit of a “pulp fiction” sound to it. The highlight of the disc is the cover of Max Webster’s Hangover. While lead vocalist Dave Kerr isn’t quite as dynamic as Kim Mitchell, he manages to capture the gritty drunken essence of the song. Other songs of note are Knuckle Duster and Straight ‘N Narrow.