Review: Schleusolz - Running Out Of Time 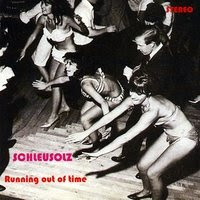 Schleusolz - Running Out Of Time
2009, Schokokontrol
Some might call it a vanity project. Others might label it a workshop piece. Some will call it genius. No matter how you term it, Frankfurt, Germany's Schleusolz is an intriguing venture. Studio magicians Worsel Strauss, Schani Wolf and Zodi Paulinen go for a space-age electronic retro vibe, described elsewhere as "Henry Mancini on acid", that is a serious attempt at fun. Wolf and Strauss openly allow that many of the songs on Running Out Of Time, Schleusolz' debut album, were experimental in nature. The end result is a collection seventeen tracks that are just familiar enough to grab your attention and unique and different enough to hold it.

Running Out Of Time opens with They Are Here!, which is titled like and sounds like the theme song to a 1950's or 1960's Sci-fi alien flick. On this and most of the tracks on Running Out Of Time you can almost sense Schleusolz laughing at themselves, poking fun at both themselves and the styles of music they traverse. Who Are You? feels like ballroom music from an old black and white movie, or perhaps something that might have played during the dance sequences on The Muppet Show if it were made today. Make My Heart Go Boom is a fusion you don't hear too often, electro-rock and tango. There's a surrealist, almost psychotic feel to this peace that will grab hold of you. Running Out Of Time is one of the most fun songs on the album, sounding a bit like a Weird Al Yankovic covering the theme song written for a hypothetical 1970's game show by Herbie Hancock.

As you can tell, if classification is your first priority you are woefully out of luck when it comes to Schluesolz. From the Middle-Eastern flavor of I Came To Marry A Blonde Girl, the space-cadet driven musings of Chivalry, the Peter Schilling-esque vibe on Neo-Liberal Coffee Bar or the Afro-Cuban Jazz vibe on Narcorhithmico, Schluesolz will spin you every which way but loose. Even the old-time variety show feel of The River Of Love is at home here; granted there's an undertone here that would be highly disturbing to Lawrence Welk or Roy Clarke and Buck Owens. Also be sure to check out Acid In The Sea, Two Canadians In Mockba and the mocking, untitled epilogue of a final track.

Running Out Of Time doesn't just break down barriers, it smashes them to pieces with a musical sledgehammer while Schluesolz giggles with glee. Schleusolz is one of those rare acts who are so original and unique that there really isn't a term to describe them. The thing they take most seriously on Running Out Of Time is having fun with the music. Join them in the fun; you won't be able to help yourself.

You can learn more about Schleusolz at www.myspace.com/schleusolz. You can purchase a copy of Running Out Of Time at www.cdbaby.com/cd/schleusolz.
Posted by Wildy at 5:10 AM