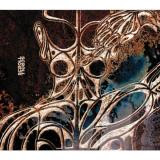 Rocking out in Zagreb, Croatia is a band you’ve probably never heard before, because Scroll is for real. I thought to do a bio of them here, but none of their materials are in English, so I am at a loss. I can tell you that scroll is comprised of Mark Mrakovcic (vox/guitar), Filip Romac (guitar), Leon Culjak (bass) and Tony Mrakovcic (drums). Scroll released their debut album, Poultry, in 2008. You don’t want to miss this one.

Poultry is seasoned with impassioned and urgent emotions, from fear to desire and even love. These core human predicaments are wrapped in musical arrangements that range from folk-punk to Brit-Rock with stops at all point in between. Lead vocalist Mark Mrakovcic puts on a dynamic show ranging from lyric ballads to head-banging, pogo-dancing hardcore screams. The album opens with Bitterone, a lyrically dense folk/punk anthem. Mrakovcic puts in a soaring, over-the-top vocal that verges on a scream at times but never loses touch with the inherent musicality of the song. Scroll pulls out all of the stops on P.Ephenty in an urgent and vibrant rocker. Tales is a lyric, acoustic folk-rocker complete with orchestration. This one is built around a great melody and a simple arrangement that crescendos from a simple rhythmic progression to a nearly oppressive one.

Cou Rouge has a Ballroom Blitz type mania to it. It's irrepressibly catchy, and you'll find yourself hitting replay on it time and time again. Pieces is a great bit of songwriting; a highly personal and heartfelt tune that underscores the wide range of songwriting and performing ability from Scroll. Slow Motion Picture brings back the urgent energy in a cross between Brit Pop and Punk with a high commercial ceiling. Mrakovcic gives his most dynamic vocal performance of the disc here, and its easy to see that he has big-time front man stamped all over him. Poultry closes out with the melancholy diorama Blue Trains, offering a point of view on a moment in time that might otherwise be anonymous. The arrangement is simple and straightforward, and the melody doesn't stand out as remarkable, but there's a touch of poetic magnificence here that leaves an impression after the disc stops spinning.

Scroll is anachronistic and unique in a glutted market of alternative/post-punk rockers. Musically covering everything from Folk-Punk to classic rock & Pop, Scroll is bound to please a lot of people along the way. Poultry is a highly artistic and notable debut album that should lead to big things down the line, and lead vocalist Mrakovcic has all the qualities you want in a front man. Make sure to check out Scroll. At the very least you'll be intrigued to see what they come up with next.

You can learn more about Scroll at http://www.scroll-online.com/ or on Facebook. You can purchase a copy of Poultry at CDFreedom .
Posted by Wildy at 5:10 AM