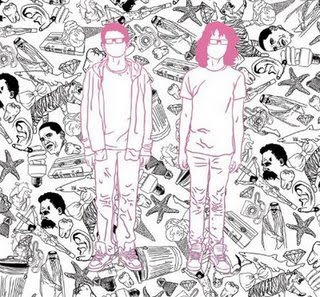 Brothers Jordan (vox, guitar, keys, bass) and Jamie (drums, percussion) Lawlor have become. Growing out of the Jersey punk scene, the teen duo has managed to craft a sound reminiscent of classic British New Wave while keeping their feet firmly planted in their punk roots. Experimental to the core, Future Future has crafted a sound wholly from their own environment, right down to the broken Rhodes Piano and Theramin-in-plastic-baby-head combination. Their debut EP, Future Future will startle you awake with its fresh mix of old and new sounds; just enough edge to get a basement party going, just enough electronic rhythm to hit the clubs, and just enough pop sensibility to give this project real commercial oomph.

Future Future opens with Television Glow, sounding like a U2 rock anthem done in New Wave style. Television Glow has real potential for radio as presented here. Teeth finds Future Future dwelling in the fuzzy land of electronic rock. My Machine stays with that buzzy chic but restores some of the pop sensibility from the first track for an incredibly balanced and listenable song. This one has radio written all over it. Dr. Albert is a paean to the Albert Hofmann, the creator of LSD, and is written in surreal and blocky chord changes with psychedelic flourishes. Hard To Exist takes the fuzzy/noise aesthetic and mixes it with a Smiths-esque depressive style and strong harmonies to create an experience that is as disjointed as it is melodic. The final track (Alone) sounds like a demo recording, featuring Jordan Lawler solo on acoustic guitar and voice. From a raw songwriting perspective this is the best tune on the album; hopefully Future Future will flesh this one out and feature it in the future.

Future Future has the chemistry of family and a tendency toward soaring pop songs gussied up in fuzzy/electronic effects. The Future Future EP is a bit uneven but shows great promise, and when they're on, they're definitely on. Make sure you check these guys out!

You can learn more about Future Future at www.myspace.com/futuretwice, where you can purchase a copy of the Future Future EP.
Posted by Wildy at 5:10 AM

Labels: LSD, The Smiths, Theramin, U2