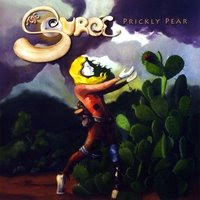 The Source - Prickly Pear
2009, Under The Sun Records

The Source is a Los Angeles based Progressive Rock band that could have just walked out of the 1970s. With the expansive creative edge of Yes, the experimental tendencies of King Crimson, and the willingness to mix things up in unusual fashion, The Source might just be one of the best things to happen to Prog in twenty years. The Source’s sophomore album, Prickly Pear was released earlier this year and continues to build on the sterling reputation The Source has developed.

Prickly Pear opens with Promised Land, a highly intricate Progressive Rock piece reminiscent of early Yes but with a bit of a lean toward Jazz flavoring. Star Dreamer plays within the Prog sphere with elements of Queen's sound. Until Morning Time continues the sonic experimentation with an eleven minute opus that sounds like early Styx and Yes jamming together. The song is very mellow and lyric in the vocal passages but turns downright medieval in the instrumental breaks. This is a complete rock symphony with multiple movements but retains a sense of continuity throughout. Thin Air sticks a little more to traditional Art Rock structure, but even at five minutes finds time for some musical exploration. Prickly Pear closes out with Castles In The Air, a fifteen minute magnum opus that ranges from ambient, melodic Rock to serious Prog. There is a clear Yes (read, Steve Howe) influence here, particularly in the guitar work.

The Source is one serious Prog band in the tradition of Yes and King Crimson. Prog is making a comeback in general, particularly in the thrash/punk realm where bands like Iwrestledabearonce and The Devil Wears Prada have incorporated the symphonic structures to devastating effect. The Source are highly traditional and very creative as practitioners of Prog. Longtime fans of the genre will love The Source, and Prickly Pear is a great introduction.

You can learn more about The Source at http://www.thesourcerocks.com/. You can purchase a copy of Prickly Pear at www.cdbaby.com/cd/sourcerocks2.
Posted by Wildy at 5:10 AM