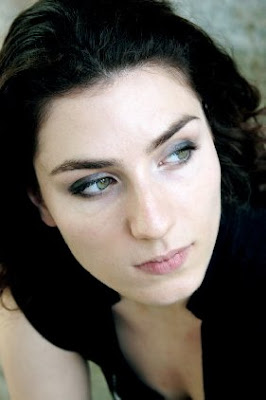 Nancy Newlis is a Russian born singer/songwriter who studied composition with a teacher who studied with Dmitri Shostakovich. Newlis is known inside Russia as a member of Babie Leto, and has appeared on television several times in her homeland. These days Newlis is living in New York City and gigging in support of her EP, Dreamers 2009. With a deep voice ala Nina Simone, Newlis is distinctive in sound and style.

Newlis has a highly distinctive voice, sounding like an odd but interesting vocal composite of Freddie Mercury, K.D. Lang and Nina Simone. Her swarthy contralto can be a bit unsettling at first, but you'll never forget that voice once you've heard it. Dreamers 2009 opens with Dreamers, a song with wonderful pop sensibility and real movement. You'll find yourself wanting to clap and sing along. Newlis tackles keeping up with the Joneses in Social Standing, a bizarre diatribe with piano work reminiscent of Tori Amos. Mistakes is an interesting one minute snippet that I'd be curious to hear fleshed out, as it has real potential. Dear Friend is a bizarre letter to a friend set to music that doesn't make a lot of sense lyrically but is set to a great musical arrangement. The album closes out with the highlight, Good Morning, Heartache. Newlis gives a wrenching vocal push to this song.

Nancy Newlis is a bit outside the pop box. Hers is a voice and style that will automatically turn off some listeners, but those aren't the folks she's singing to/for anyway. I can't say I got into everything on Dreamers 2009, but she has a distinctive talent and style that makes you curious to hear what she'll come out with next. Everyone once in a while it's a real gem.
Rating: 3 Stars (Out of 5)

You can learn more about Nancy Newlis at www.myspace.com/nancynewlis or http://www.nancynewlis.com/, where you can purchase a copy of Dreamers 2009.
Posted by Wildy at 5:00 AM