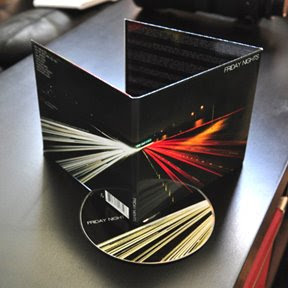 Friday Nights opens with the catchy and highly infectious anthem Self Inflicted. The rhythmic feel of the song combined with distinctive vocals and killer harmonies make Self Inflicted one of the more memorable pop/rock songs of the year, to date. Whose Side Are You On reminds me a bit of the writing style of Colin Hay and Men At Work in another very catchy offering. Hey Jeremy is a song about following your dreams and inviting folks you know along for the ride. Takeover begins with big driving rhythms and evolves into another highly catchy pop/rock gem. You'll also want to check out Personal Holiday, Grow For You and Anchors Away.
Friday Nights have a very catchy sound that holds a great deal of commercial potential. Some of the slower material here drags a bit, particularly because Friday Nights seems to vacillate between wanting to be an ethereal rock band or a Pop/Rock dynamo. The songs along the fault line of the two styles are well-written, but Self Inflicted is likely the class of the album. Be sure to check out Friday Nights!
Rating: 3.5 Stars (Out of 5)