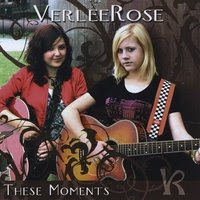 VerleeRose - These Moments
2009, VerleeRose
Seattle's VerleeRose is a young duo, consisting of Keira Verlee, age 15 and Ellie Rose, age 14. They are very new to the music world, but are already generating a lot of buzz in the Seattle market. VerleeRose is also Wildy's World's Artist Of The Month for May, 2009. The ladies of VerleeRose came together when they were asked to write a song for their middle school graduation in 2008. The experience worked out so well that they kept at it, and less than a year later released These Moments, a collection of 9 original songs that both underscores and belies their relative youth.

VerleeRose was selected as Wildy's World's Artist Of The Month for May 2009 because of the distinct potential they have as a duo. These Moments is a musical breath of fresh air because of the innocent grace that pervades the performances thereon. The recordings are a bit rough, and limited by the relative guitar skills of the two singers, but you can hear flashes of maturity and what will become distinct songwriting styles over the course of a few years. The album opens with Falling Fast, a sweet, rough ballad akin to some of Jewel's early material. Like all young acts, VerleeRose has their awkward moments, such as A Day Ago and This Girl, but then you hear a song like Nowhere and you realize that the awkward moments are just normal growing pains. Nowhere is a potential hit built on a can't fail hook with a highly memorable chorus and great harmonies. If the right producer gets hold of this song VerleeRose will be surfing the top of the pop charts.

Would You has the seeds of a great song in it, but gets stuck in a repetitive rut and just never quite gets where it might go. Someone Extraordinary has a bit more power: pure teen angst in song with no gloss or sheen. This one is a bit forced but has real potential. There's a bit of a lull in the middle here, with All My Mistakes, This Girl and It All Works Out being pleasant listens but not really grabbing attention before New Changes hits you with the pure potential of VerleeRose. The song is very young but incredibly poignant and forward looking. Time and maturity will take this ability to see beyond self in song and turn it into a finely honed songwriting ability. The album closes out with re-castings of two songs, an A Capella version of Would You featuring Michael George and the Denelian remix of Nowhere by Kelly Dale. The latter is interesting, as it is not the direction I would have thought for the song, but it works moderately well as a club mix.

VerleeRose should be on your radar. While their songwriting style is young (consistent with their ages), there is a definite spark here that, if nurtured, will help them to quickly move beyond where they are. Comparisons to the Indigo Girls and Tegan and Sara are not without merit, but I see VerleeRose blazing a musical trail with roots that reach to those artists without duplicating their sounds. These Moments is a positive introduction to VerleeRose, and the launching pad for what just might turn out to be a great success.

You can learn more about VerleeRose at www.myspace.com/verleerose. You can purchase a copy of These Moments at www.cdbaby.com/cd/verleerose, or download the album through iTunes.
Posted by Wildy at 5:10 AM