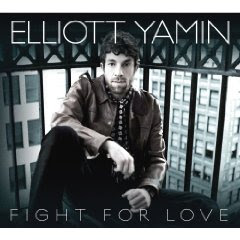 American Idol fans will remember Elliott Yamin from his 3rd place finish in Season 5 of American Idol, coming in behind Taylor Hicks and Katharine McPhee. Yamin’s self-titled debut album debuted at #1 on the Billboard Independent Albums Chart in 2007 and reached #3 on the list of top 200 albums at one point that year. Yamin’s latest album, Fight For Love is available as of today, May 5, 2009.

Fight For Love opens with Let Love Be, an electronic based R&B jam that showcases Yamin's impressive voice over a forgettable arrangement. The net effect is to make Yamin look very good as he carries a sub par song further than it has any business going. Know Better runs much the same path, with an arrangement that is passable but a strong showing from Yamin on vocals. The title track, Fight For Love, finds Yamin sounding like late Peter Cetera Chicago if they'd been performing in a 21st Century R&B style (and perhaps an octave lower). Listen to the harmonies and the chorus in particular and you'll hear what I'm talking about.

You is an interesting entry on Fight For Love. The melody and structure are more engaging than the material that comes before, and Yamin sounds a bit earthier here. You is a potential big time ballad, although it does sound like some effects were added to the lead vocal, which is always a bit disturbing; particularly from a vocalist with a voice like Yamin's. Much of the album is pedestrian R&B/Pop, where the more dance oriented Don't Be Afraid and You Say or the slower jams Apart From Me or How Do I Know. Cold Heart stands out as highly enjoyable with its funk base and vibrant vocal line. Yamin sounds like he had fun with this one, and the energy is a bit infectious. This Step Alone is also a standout track as Yamin commits heart and soul to the message. The album closes out with Someday, a commercially consumable but not highly memorable pop tune that sums up the general vibe of the album.

I was disappointed with this album, but not with Elliott Yamin's performance. The former American Idol contestant gives all he's got vocally on material that just isn't up to his level. Some of the songs presented here have real promise, but the production relies on cookie-cutter R&B/Pop arrangements cooked up in an electronic kitchen. I have no doubt Elliott Yamin will chart a few songs from Fight For Love and move some units, particular amongst Idol fans, but with a voice like his you're right to expect a bit more. Yamin's performance here is consistent with the excellence of his voice, but the material leaves a lot to be desired.

You can learn more about Elliott Yamin at http://www.officialelliottyamin.com/ or www.myspace.com/elliottyamin. You can purchase a copy of Fight For Love at Amazon.com or wherever music is sold. The album can also be downloaded through iTunes.
Posted by Wildy at 5:59 AM

I am very disappointed with your review. I think like so many others, that this cd is amazing. I love every song on the cd, each one is better than the other!! I think this cd will take him to the next level. I also think that Elliott Yamin so talented and his voice is so amazing!! I am a die hard fan and always will be.

You must be 100. You pretty much pan the CD and give the most out of date song on it, Cold Heart a mark for being a standout? And as far as production over a lead VOCAL...HELLO....you listened to the radio in the last 20 years. You're not a credible reviewer.

Totally disagree with your assessment. I think the first 5 to 6 songs are very strong tracks...I can see at least 3 of the songs on this CD making it to the airwaves on a regular rotation. The one track I don't care for is Cold Hearted. This does sound amateur to me but overall I am very impressed with his sophomore CD.

I'm in disagreement with your review as well. Cold Heart is my least favorite track. The rest of the songs are very radio-friendly and well-written

To my mind everyone may read it.