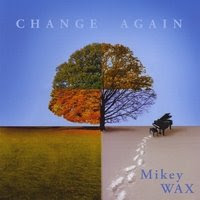 Mikey Wax put out his first album at the age of thirteen, landing an instrumental composition on New York Radio Station 101.9, then a jazz/instrumental outlet. The Long Island native is classically trained in piano and self-taught on guitar. He spent his college years in Nashville soaking up the local music scene, but his true motivation came weeks after graduating from Vanderbuilt University. A letter written by his deceased grandfather nearly 20 years before was given to him. The wisdom and love in his grandfather’s words inspired the song With You Goes, and also inspired Mikey Wax to follow his dream to make music. Wax’ 2nd CD, Change Again, was released in 2008. It charted on the iTunes plus charts in the US, Canada, Australia and UK, reaching as high as #46 in the US. The album has also helped land Wax licensing deals with MTV, E! and ESPN.

Wax has an interesting vocal sound that is half way between John Mayer and The Plain White T’s’ Tom Higgenson. The songs on Change Again are primarily of the non-threatening, artfully written pop variety with a tendency toward big, soaring choruses. The album kicks off with Slow Motion; something of a generic yet aurally pleasing pop tune with the requisite big chorus. Songs like With You Goes, Hourglass (Love Will Find A Way and Love Light (Triad) also fit this generic yet sonically soaring style. I don’t want to call it bubblegum because it’s most definitely not, but there’s some of that same fluffy, feel good quality to the music. It’s when you get to a song like Twisted Fate when you realize that you’re dealing with an artist with a little more than just an ear for a good hook. Twisted Fate is the story of a prophet who foresaw a great tragedy yet never told a soul, and the guilt and grief carried by that individual. It is an incredibly smart and poignant bit of writing; a bit deeper than your typical pop song (perhaps too much so for real impact at radio, but it’s a fine song). The other definitive highlight on Change Again is Last Great Song; an aptly titled tune as it is a special song and it was the last one on the disc that really held my attention.

Mikey Wax is an interesting study on Change Again. There are really two different types of material here; the classic, hook laden pop song with big chorus and harmonies, or the singer-songwriter material that is popped-up but still very strongly rooted in that other tradition. The pop material works strongly for Wax on the commercial side, creating a sound that is instantly accessible for outlets like radio, while allowing Wax to cater to his more thought-provoking side in the singer/songwriter material. Not everything works here, but when Wax is on he is definitely worth making time for. Change Again is a strong album with a few weak moments; A definite keeper.

You can learn more about Mikey Wax at http://www.mikeywax.com/ or www.myspace.com/mikeywax. You can purchase a copy of Change Again at www.cdbaby.com/cd/mikeywax, or you can download the album through iTunes.
Posted by Wildy at 4:00 AM