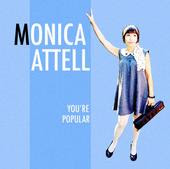 As lead singer, keyboardist and sometime flute player for NYC stalwarts Beta Zane, Monica Attell was a fierce musical vortex on stage. These days, the Stamford, Connecticut singer/songwriter has more appreciation for the subtlety and artistry of her creations. The kid-sister of Comedy Central's Dave Attell released her third solo-project, You're Popular earlier this year. You're Popular continues Attell's transformation from Rock Goddess (Beta Zane) to geek-pop princess (2006’s Band Geek) to mature singer/songwriter. While we're not quite willing to call Attell a 21st Century Sandra Dee, the comparison isn't too far off the mark.

You’re Popular opens with Honestly, a 1950’s throwback reminiscent of Sandra Dee or any one of a number of the fair-circuit pop stars of the era. Side-Steppin’ breaks into the late 1960’s and early 1970’s with a combination of classic R&B sound and some serious funk riding underneath. Attell’s clear, sweet and every-so-slightly nasal vocal sound is reminiscent of the early days of Rock N Roll, and gives her a distinctive sound. Sunny Day Fantasy is a great 1960’s style girl-pop song and would fit right into the radio playlists of that era. Waiting is more of a traditional pop/rock love song that is sweet but doesn’t have the same nervous energy to it that is apparent on the first three tracks. You’re Popular is more in line with Attell’s two previous projects, the aforementioned Band Geek and last year’s My Bully EP, having a comedic bent to it like a cross between Meryn Cadell and early Barenaked Ladies.

After hearing Attell’s last three projects, and being loosely familiar with her stint in Beta Zane, I’d draw the conclusion that she’s still searching for something musically. Attell has a distinctive sound and style as a vocalist and is highly talented both on keys and the flute. Her ability to capture catchy melodies and memorable hooks in song is well documented across three CDs and countless live shows in the greater New York Metropolitan region, but a cohesive style or direction remains elusive. You’re Popular spends three songs exploring styles and eras that are highly appealing to the ear, and Attell provides some great material, but is drawn back to the witty, quasi-novelty pop realm before she’s done. Whatever you might make of it, it’s very clear Monica Attell is a very talented writer and performer. You’re Popular, while not her best work, is a very strong offering and an experiment at branching out and becoming a more complete and stylistically diverse songwriter; a transitional project that should lead to great things down the road.

You can learn more about Monica Attell at www.myspace.com/monicaattell. You’re Popular is available at electronic outlets such as iTunes. No word on traditional CD copies at this time.
Posted by Wildy at 5:00 AM