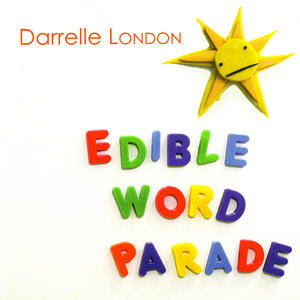 Sometimes a CD will come along and just blindside you with how good it is. Darrelle London’s Edible Word Parade is just such a CD. The Toronto resident (and former farm girl) is classically trained in both piano and voice, and was smart enough to get into Law school. She was also smart enough to know that music is where she belongs, and has garnered a lot of attention in a short time on the Toronto circuit. With a sweet voice that belies her sophistication, London will disarm you with her charm, butter you up with her wit, and drive her message home with an unmerciful sweetness accompanied by melodies that make you want to sing along.
London uses her personal brand of quirky, piano-based pop; combines it with a sweetly beautiful voice reminiscent of Lisa Loeb and an almost child-like simplicity to disarm listeners and create a listening experience you'll never see coming. London writes honest words about honest emotions and events with glibness that is compelling, telling stories about adult relationships with a child's candor and grace. Her songs are a melodically ecstatic segue into musical neuroses of the type caused by human relationships.

Edible Word Parade opens with Understand, a request for patience from someone who is falling in love but needing to go slow and grow into what she's feeling. Selfish is a wonderfully written song about two people who are together in spite of sharing the same bad qualities; a lesson in attraction for all the wrong reasons. Bad is a revelatory pop song, and one of the peppiest songs of heart break you will ever hear. London flashes songwriting brilliance on The Game, calling out someone who plays in relationships rather than participating in them. The Game is brutally honest, but delivered with a sweetness that is so counter-intuitive it makes perfect sense.

Crystal Clear is something of a tactile love song, told in terms of moments, experiences and sensations. The song is sweet, uncomplicated and full of love, and it's built around an unusually charming bridge and chorus that will stick in your head for days. Two Roads is a remarkably mature and subtle look back at a failed relationship. The protagonist begs her former partner not to ask her to come back, fearing she won't have the strength to say no. You're The Star is one of those songs that most people will find a connection because we've all known someone like the person described within. London displays her ability to capture emotions, moments and people in song with pitch-perfect clarity here. These Days is a deeply melodic exploration of someone living in the midst of heartache. London seemingly finds hope amid the vortex of emotions of a life torn asunder. London closes with Work Out Fine, another sweet love song expressing hope based on the ineffable quirks of a couple. The ability to understand one another without saying a word is the example London keeps coming back to, and she lays it out in a way that's both artistic and emotionally sincere.

No, I didn't see this one coming. Darrelle London has created an amazing album full of sweetness and light, wrapped up in near-perfect pop confections. Her voice is has qualities of sweetness and beauty that make you want to listen to her all day, and the brutally honest yet child-like and innocent quality of her lyrics will draw you in. Edible Word Parade gets our highest recommendation, as a Wildy's World Certified Desert Island Disc. Put this one on the top of your "get" list.

You can learn more about Darrelle London at www.myspace.com/darrellelondon or http://www.darrellelondon.com/. You can download Edible Word Parade from iTunes without difficulty, but getting a hard copy on CD is a little more challenging. Indie Record Stores in Canada may have it, specifically SonicBoom, SoundScapes or Criminal Records, all in Toronto.
Posted by Wildy at 5:10 AM

Great review! Just to let you know, it's easy to get a hard copy of Darrelle's disc as you can order it online through IndiePool or at HMV and Chapters/Indigo locations across Canada. Just go to darrellelondon.com and click on the BUY tab for details.