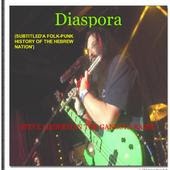 The Gangsta Rabbi is at it again, this time with a musical telling of the travails of Israel and her children on Diaspora: A Folk/Punk History Of The Hebrew Nation. Diaspora is a highly interesting song cycle; based in Lieberman's trademark Garage sound, listeners will be extremely lost without a lyric sheet. Whether it's the vocal mix or issues of diction, I found it next to impossible to decipher the lyrics. Lieberman goes a bit further than just detailing the struggles of Israelites around the world; he assigns blame. Lieberman essentially chalks up all of Israel's struggles to sin; implying that each time Israel is separated from her land it is because her people weren't following God's will. Lieberman incorporates the flute into many of the songs here ala Ian Anderson, as always, and even plays with electronic instrumentation from time to time. Midianites comes across as a bit of cultural trash talk to all the peoples over time who scorned The Hebrew Nation but who found the end of their own cultural lines while Rachel's children continued on. Meri'bah-Kad'Esh caused me to chuckle a bit; it's a song about being freed from Egyptian dominance and sounds something like a polka.

The Fall Of Jerusa'lem introduces electronic instrumentation along with flute in bass in what becomes an interesting if slightly messy sonic stew. 4th Diaspora: The Endtime makes explicit what Lieberman has implied throughout; Israel constantly fights for her own survival because of her own sin, yet remains God's chosen people. The album closes out with For The Children Of The Ga'Za, reaching out to the innocent victims of Israel's on-going struggle with the Palestinians, bemoaning the deaths of innocents on both sides along the way.

Lieberman never fails to be provocative and straight-forward in song. Diaspora is no different. Lieberman tells stories drawn directly from the Torah colored by his own personal insights and beliefs. The result is a historical perspective with minimal political shading that is compelling for its willingness to share the blame. Diaspora is an interesting listen, but it is truly Lo-Fi and may just not fly for some listeners. Nevertheless, Lieberman is always worth a spin.