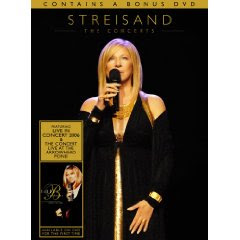 Barbra Streisand is the top selling female artist of all time, with over 71 million albums sold in the US alone. Her 50 gold albums, 30 platinum albums and 13 multi-platinum albums rival artists like The Beatles, Elton John and Neil Diamond. Streisand started out in her high school choir with fellow future legend Neil Diamond, also rubbing elbows with Bobby Fischer. Streisand started out as a nightclub singer, working her way up through Off-Broadway productions and regular gigs at gay bars in New York City on her way to landing an appearance on Jack Parr’s The Tonight Show in 1961. Streisand made her Broadway debut in 1962 in I Can Get It For You Wholesale, and won her first two Grammy Awards in 1963 for The Barbra Streisand Album. More Broadway shows would come, as would movies and a string of highly successful recordings. Streisand has received 10 Grammy Awards, including the Grammy Legend Award (1992) and Grammy Lifetime Achievement Award (1994).

The Concerts features two full shows from this legendary performer. Included is the full set list from a show in Ft. Lauderdale, Florida from Streisand’s 2006 North American tour. This concert includes some firsts from Streisand, including My Shining Hour, A Cockeyed Optimist and Unusual Way. A guest appearance by Il Divo is just dressing for this concert experience. The set also includes a show from her 1994 tour recorded at Arrowhead Pond in Anaheim, California that includes the Yentl Medley. This tour was Streisand’s first return to the stage in a quarter century; it’s apparent from the energy Streisand brings to the stage as well as from the response from the crowd. The third disc in the set is a cornucopia of goodies for hard core Streisand fans, featuring video clips from television performances over the years and the documentary Putting It Together: The Making of the Broadway Album.

There are a lot of compilations and retreads out there that come out of the major music labels these days. No one at the majors wants to invest in developing artists anymore, but they are more than willing to slice and dice long established artists’ catalogs to create “new” releases ever other year to keep up their income levels. I tend to be very skeptical of such tactics, but this collection is very much worthwhile if you’re a Streisand fan. If you don’t know much about Streisand, come out from under that rock and check out The Concerts. Streisand is iconic in a way that artists like Sinatra, The Beatles, Ray Charles and Neil Diamond are or were. The Concerts is worthy of that reputation.
Rating: 4.5 Stars (Out of 5)

You can learn more about Barbra Streisand at http://www.barbrastreisand.com/. You can purchase The Concerts at Amazon.com or wherever DVDs are sold.
Posted by Wildy at 5:05 AM