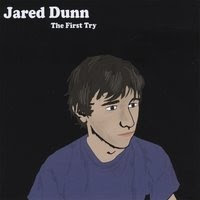 Fayetteville, Arkansas singer/songwriter Jared Dunn is living a dream. He released his debut solo album, aptly named The First Try, in June 2008, amidst playing in three different bands, sporadically touring and working as a session drummer. With a highly rhythmic piano style reminiscent of Ben Folds and a singing voice that sounds a bit like Liam Gallagher, Dunn is bound to garner attention from his sound alone. The nine songs presented on The First Try display a songwriter with a lot to say and a strong piano rock sound to drive the message. Lyrical density and the rhythmic nature of Dunn's writing might tend to overwhelm listeners a bit at first, but once you're up to speed it's quite an experience.
The First Try opens with Circus, a frenetic, piano-driven rock song that will get stuck in your brain. Something's Wrong With Cindy is a highly inventive piano tune; highly listenable without sounding overly commercial. This is likely to be a concert favorite. Dunn gets deep on Be Something, exploring the human condition and change. Be Something expresses a need to be different juxtaposed with a fear of change in modern vernacular. This is a strong composition with a lot of resonance for anyone unhappy with their lot in life but too comfortable to break the chains.

My favorite song on the disc is Baltimore, which definitely shows the Folds influence in one of the best written tunes here. Clouds Above Our Heads is a relationship song about a partnership doomed to fail. In spite of the darkness of the song the piano is particular vibrant and jaunty, suggesting that at least one half of the pair isn't as sad as it might sound. The most complex and musically interesting composition on the CD is the last one, Satellite Parade. Listen closely to the bass guitar work here for a new appreciation of how much life that instrument can bring to a song.

With an obvious influence like Ben Folds it's hard to go wrong, and some may knock Jared Dunn for sounding a bit too much like Folds, but that's an unfair characterization. The First Try does reflect a similar piano-driven style, but his melodic and lyrical take on things are distinctive, and Jared Dunn shows the early signs of developing into a sophisticated and complex songwriter. The First Try is a good one, and leaves us looking forward to what might come next.

You can learn more about Jared Dunn at www.myspace.com/jareddunn. You can purchase a copy of The First Try at www.cdbaby.com/cd/jareddunn, or you may download it through iTunes.
Posted by Wildy at 5:00 AM