Review: The Perms - Keeps You Up When You're Down 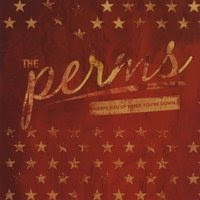 The Perms – Keeps You Up When You’re Down
2009, Hugtight Records

The Perms are a Winnipeg, Manitoba, Canada alt-rock band with a distinct pop sensibility that endears them to fans. Like alt-rock gamers Weezer, or Canada’s own Sloan, The Perms suck you into their songs with bright, garish melodies and big hooks while feeding you lyrics with more than just a little intellectual bite. The perms 5th release, Keeps You Up When You’re Down hit shelves in early 2009. Pay attention now, this is a good one.

Keeps You Up When You're Down opens with Give Me All Your Lovin', a kinetic rock song with an arena-rock worthy chorus. The Perms manage a real rock song with distinct pop hooks and a strong commercial sense. As You were keeps that energy going in a slightly more laid back setting. The Perms pull out the big harmonies and classic hooks here and throughout the rest of the album for a sound that is retro yet modern. Running Away hits the Pop meter hard, coming across as one of the most highly commercial tracks on the disc. Lead vocalist Shane Smith has a comfortable voice that is a pleasure to hear; nearly familiar but not something you can name. This is the sort of music that makes you want to go to a show. The harmonies border on Beach Boys territory at times and the melodies make you want to sing along.

World To Me is an upbeat love song perfect for any modern rock mix tape. The sheen on this song is so bright, the melody so peppy and the hooks so big I can't see how this song doesn't get licensed many times over. This is a great "summer song" candidate; if it were twenty years ago World To Me would be a major pop/rock radio hit. Nightshift opens sounding a bit like Max Webster covering Footloose; a vibrant rock song with great drive. This is another potential hit for The Perms, but my favorite song on the disc is Things Left Unsaid. Other highlights include Who Are You Fooling, The Mess, Big Mistake and Salvation.
The Perms have a distinct pop sensibility and an ability to write highly consumable and memorable Pop/Rock gems. The use of complex harmonies and a strong team writing effort make Keeps You Up When You're Down one of the more memorable albums of the young year.

You can learn more about The Perms at http://www.theperms.com/ or www.myspace.com/theperms. You can purchase a copy of Keeps You Up When You’re Down at www.cdbaby.com/cd/perms5, or you can download the album through iTunes.
Posted by Wildy at 6:28 AM