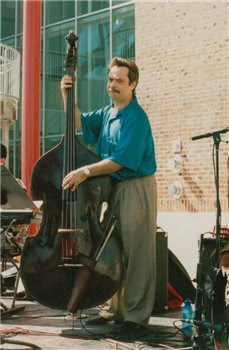 Michael Staron is a composer, bass player, university lecturer and musical theater veteran. His music credits are extensive, including the likes of Roger Williams, Red Skelton, Sid Caesar, The Marvelettes, Eddy Arnold, Al Martino, Jerry Vale and Vic Damone. He’s also performed as a musician in numerous musicals, including Evita, Rent, Joseph And The Amazing Technicolor Dreamcoat (with Donny Osmond), A Chorus Line and West Side Story. Staron holds a Masters in Jazz Pedagogy from Northwestern University, and teaches at DePaul University, Benedictine University and Triton College. Despite all of this, Staron still manages times for original composition, performance and recording. His CD, Rock Originals, includes five original compositions you jazz fans won’t want to miss.

Rock Originals opens with Ham Stew, a vibrant Rock N Roller with an upbeat 1960's feel. Back On The Highway is a bit tired, plodding a long to a rock beat but never quite soaring. Questions has an early-1970's heavy rock feel. The song is catchy and philosophical without being too deep. Hail, Britania offers a funky/jazzy presentation that is fresh but is so repetitive that it ends up flat. Dear Ann is pleasant but ininspired.

Mike Staron crosses a lot of Rock N Roll boundaries in five songs that are better termed a collection than an EP. There is no grand theme or tie that binds between the songs. Consequently, Rock Originals comes across as disjointed and a bit disorganized. Staron has distinct talent as a musician, but this particular offering just didn't catch on with me.

You can learn more about Mike Stern at http://www.chicagojazz.com/MikeStaron or www.sonicbids.com/MichaelStaron2. You can purchase a download of Rock Originals on iTunes.
Posted by Wildy at 5:00 AM