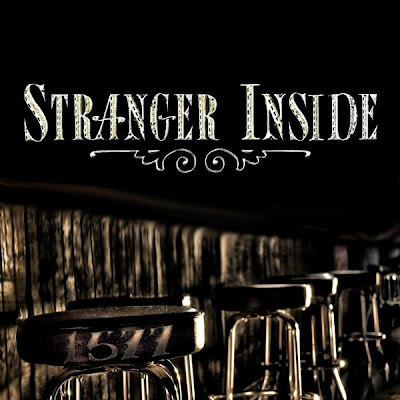 Stranger Inside is a young band with big aspirations making some noise in the Baltimore and Annapolis, Maryland markets. Combining distinct instrumental talent, high energy and a strong desire to succeed, Stranger Inside certainly seems to be going somewhere. Their debut EP, 1577, mixes Classic Rock, Grunge and Alt/Modern Rock to create a sound that’s perhaps not original but certainly fresh.

Stranger Inside opens with Solitude, a vaguely whiny hard rock song with a melodic bent and big, impressive guitar work. So Clean finds the band transitioning to a fairly radio-friendly hard rock sound that sounds like a Grunge band embracing it's 1980's hair-band roots. There's some impressive guitar work underneath Wicked Angel, although lyrically the song leaves something to be desired. Stranger Inside seems to suffer a bit of identity confusion on the next two songs: Downfall is bland rock with a neutered feel, while What I'm Thinkin' over-compensates with a raw dose of Testosterone that checks musicality at the door. Dying Dream picks up on the 1970's/1980's Classic/Hard rock blend that relies heavily on the guitar work of Justin Walter. While this is strength, Billy Beyer’s vocals aren't a high point here. Stranger Inside closes with what might be its best track, Sip Of The Bottle. The songwriting still isn't overly strong, but the chorus on here is killer.

Stranger Inside sounds like a band that hasn't entirely decided what they're about yet. Beyer is a decent enough vocalist but is limited in range and flexibility. On the other hand, Walters has primo guitar chops and helps to fill out the sound of Stranger Inside enormously. 1577 is a snapshot of a band in progress. If all goes well it will have more presence as a document of where they came from as time goes on. For now, it's a plausible hello to the world.

I have to say that I agree with the review on the cd for the most part. However, the cd does not do them justice. I recently saw them live at RamsHead Live in Baltimore while checking out one of my friend's bands and they were amazing. I had not heard of their cd at that point so I didn't really no anything about them. They have a great and unique stage show with tons of energy and it appears that Billy's vocals have matured greatly since the release of their cd. Billy also plays guitar, and Justin's and his guitar work together are hands down some of the best I have seen from a band on the local scene. They have many catchy songs that help define their style as a great rock band. I think they only played like 2 songs off the cd. But anyways, I look forwards to seeing them again. I also wanted to post a link to one of their songs they uploaded from the show. http://vids.myspace.com/index.cfm?fuseaction=vids.channel&contributorid=2267112
Keep rocking guys! See ya soon! :) ~Megan

but their new stuff is really good, i think the CD was made when they first became a group and then developed a better sound, def worth checking out now

this band is terrible, every song is about either being drunk or some slutty girl (which describes their fan base as well) their sound is recycled radio rock that is so mainstream its sad, you can tell they write to try and become rich, not because they enjoy making this music, i was at a show at a while back and then guys in the band wouldnt even acknowldge the fact that i was trying to talk to them because they were busy chasing every girl that came to their merch booth, for a band that is probably still selling tickets to their parents they have insane egos

I am a bit upset about the comment posted directly above mine by "Anonymous" on January 19th. Being a fan, friend, and avid listener of this band, I do not appreciate being called a "slutty girl." But, it seems to me that whomever posted this comment recently peeked in their shorts and found a pair. Of course, the pair wasn't big enough for them to actually come out and say who they are. And why would you? I have a gut feeling that you, too, are in a band, and why would you want to put yourself out there as someone in the local Baltimore scene who slanders other bands? And not only slanders bands, but the fans as well. You, my friend, have just guaranteed a loss of a gigantic and dedicated fan base if it ever were to get out who you are. When has it ever gone over well when members of other bands talk badly about other bands? Especially over the internet and especially anonymously?

If, however, you aren't a band and just a fan, you seem to have a very serious grudge against them and that is what's sad. Not the "recycled radio rock" you referred to in your post. And forgive them for writing about things EVERYONE does which includes drinking, partying, and just having fun. I don't know about you, but I don't like listening to songs about why your girlfriend left you, why you cut yourself, or why your mommy didn't love you enough everyday. I bet you do or else you wouldn't have such an undeserved vendetta against Stranger Inside. Sure, those kinds of songs are good when you're feeling low, but sometimes, you just want to let loose and that is exactly what most of Stranger Inside's song will do. They'll help you forget about your problems and just have fun. And in case you don't listen very well or judged them before you heard an entire set list, I'm pretty sure "Dying Dream," "Gray," and "Remember" are not about drinking or chasing some slutty girl. It's the opposite, in fact.

These guys have the talent, the stage presence, the smarts, and the drive and that is why your post, Anonymous, was dripping with disdain and jealousy.

Also, who in their right mind makes their parent's pay to come to their shows? I know Stranger Inside doesn't, and if you do happen to be in a band, and you do happen to make your mommy buy a ticket to your show, who really has the problem?

Stranger Inside's first CD, 1577, while incredible, does not do them justice. In the past year, they have improved tremendously. They have an amazing stage show and are really into their fans. They mingle with everyone and are really interested in knowing their fans as friends, not just as ticket sales.

Come check them out March 6th at Recher Theatre in Towson, MD! =D

I am a serious fan of "Stranger Inside", and I resent the comments about the fans being sluts. I am 54 years old, have a family, but have been into ROCK AND ROLL! since I was a young girl. That never left me, and when I first heard these guyss, I was theirs right at that very moment, and still am. And don't tell me that they don't mingle with their fans....every show I go to, which is usually all of them, I get hugs from all the guys and one of them even buys me drinks. I work in a professional world where I need to let loose on the weekends, and that's what I do when I see these guys. "Anonymous", you can just BITE ME!

Stranger Inside is one of the best bands around! They pour their heart and soul into their music, and they absolutely love what they do! See just one of their shows, talk to them afterwards and they become the best friends you could ever have. I went to their show at the recher awhile back, and when I talked to them, they gave me ticket to their next show, hung out with us at their merch booth the whole time before they went on stage and even gave me one of the drumsticks at the end of their set. They are so great to their fans. I've spent a lot of time with them at their concerts and at other band's concerts whom they support. So anonymous, you should take that stick out of your ass and realize that you are so stupid for everything you just said. I don't know what would give you the impression that they wouldn't want to talk to you, but you are SOOOOO wrong about them. LOOSEN UP.

this band is one with great promise, the CD was a great starting point for them and their writing has grown since then. their lyrics as well as the music have matured. this band is good to see live, they always have enoguh energy to fill any room or arena they are playing. a great band and a great group of guys!