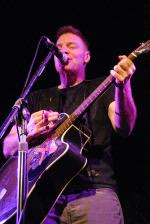 The first time I saw Ron Hawkins perform was in 1993, heading up his band Lowest Of The Low. Hawkins was engaging and full of youthful (and at times chemically enhanced) vigor back in the day. He had a compelling voice, an adept hand at crafting lyrics and an honest approach to songwriting that rivaled folks like Bob Dylan, Tom Waits and poet Charles Bukowski. Flash forward to 2009, and a solo show from Hawkins at Buffalo’s Allendale Theatre, the home of Buffalo’s Theater Of Youth. The stage was sparse, with both bat wings curtained, the stage dressed in black, a few speakers, two microphones and a chair for cellist Alex McMaster.

Ron Hawkins strode to the mic and tore into the first song, Born To It in a kinetic opening that foretold how the night would go: a long, slow burn bursting with energy and panache. The crowd of about 250 folks, ranging from twenty-somethings to AARP members, was very responsive; going willingly with Hawkins to each new musical tale. Don’t Be Long was a particularly powerful and intense performance, with Hawkins ringing every bit of angst out of the moment that was possible. He then turned around and absolutely ripped the roof off on Bite Down Hard. (Waitin’ On) My New Heart got quite a reaction from at least one patron, a fact that amused the crowd and Hawkins himself.

To list highlights from the show would nearly run afoul of the atmosphere Hawkins created on stage Saturday night. The show was one long, subtle crescendo with small peaks as crept to an intense musical boil. Out Of The Black was particularly enjoyable, and The Prodigal Sun carried the weight of autobiography. Hawkins also set up songs wonderfully, tearing through Lowest Of The Low's The Last Recidivist before settling into the moving DFW. For emotional weight, this felt like the centerpiece of the night, and closed out the main set. Neither the crowd nor Hawkins had had enough, however. Hawkins returned in grand style, with a blistering acoustic rendition of For The Hand of Magdalena from Lowest Of The Low's first album, Shakespeare, My Butt. Cellist McMaster rejoined Hawkins for the final two songs, Telltale Heart and a stunning cover of Ryan Adams' My Sweet Carolina.

This was one of those rare shows where you're on the edge of your seat the entire night. Hawkins had the whole crowd in the palm of his hand. What impressed me most about the show was Hawkins himself, who was extremely human on stage. I don't mean the fake sort of "I'm one of you" vibe you get from aging rock stars, but an authenticity that can't be manufactured. Hawkins was engaged and confident in "the moment" of performing, but was humble and occasionally even seemed taken aback by the positive reaction he received from the crowd. Hawkins still sings songs that touch on the injustices and pitfalls of being human in a world where humanity is undervalued, but does so as a man who is finally, perhaps, happy with himself and what he's been able to do. That inner grace makes his stories of grit and grandeur all the more powerful.

Hawkins is a rock star in his own right, with one Hall Of Fame induction under his belt for his time with Lowest Of The Low. The young man I saw 16 years ago was too distracted to appreciate moments like this show; but the Ron Hawkins I saw on stage Saturday night was taking it all in and giving it back to the crowd. They loved him for it; and for he first time he might have believed it.

While Hawkins was the reason all were there, Alex McMaster added both her cello skills and vocals to the performance (as well as one of the meanest Rock grimaces I've seen in a while). Whether filling in the sound, providing harmony or counter-melodies or occasionally stretching the sound in ways hard to imagine from just one instrument, McMaster was an integral part of the evening without ever stealing the spotlight.

Ron Hawkins will be touring Canada with Billy Bragg throughout the month of November, 2009. You can learn more about Ron Hawkins at http://www.ronhawkins.com/. You can purchase CDs and/or downloads from http://www.victimlesscapitalism.com/. Hawkins was previously Wildy's World Artists Of The Month for August, 2009. Check out our interview with Ron Hawkins, as well as reviews of 10 Kinds Of Lonely and Chemical Sounds.