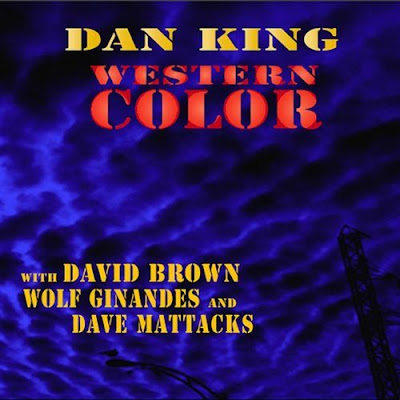 Western Color opens with Rest Stop, a mellow bit of Americana with a pleasant feel. King has one of those voices that make you think he's lived the road life for a while; gruff but pleasant. When It Comes Down To Love is a plodding tune that has some nice instrumentation but lacks energy, particularly in the vocal line. The Enemy has similar issues. King has an enigmatic sound and the instrumentation is great, but the vocal line ends up sounding like its on automatic. I'll Move On The Same is a definite step in the right direction, sounding a bit like Mark Knopfler in a pleasant Americana-flavored tune. No Crying is a great tune, turning up The Blues in a tasty twist that overcomes the once-again low-key vocal from King.

Greenlight Day gives Western Color an upbeat moment, although the lyrics are a bit on the campy side. The Ruins takes a much more poignant tone in a story song about the passing of time and generations. The song is well written and full of heart and sits comfortably with King's easy delivery. King closes out with three live tunes, an alternate take and a demo. The live performances trade trait for trait with the originals. The instrumental work (particularly on guitar) is better on the live recordings, but King's vocals don't fare as well in the live setting.

Western Color is pleasant; it's comfortable like an old pair of shoes, but it doesn't really leave a strong impression. King's voice is initially affable but the lack of dynamics or real energy detracts from the overall atmosphere of the album. King's band is first class however, and the disc ends up as one of those projects with several nice qualities that just fail to enthrall.

You can learn more about Dan King at www.myspace.com/lightcity. You can purchase download a copy of Western Color from CDBaby.com or Amazon.com.
Posted by Wildy at 5:00 AM