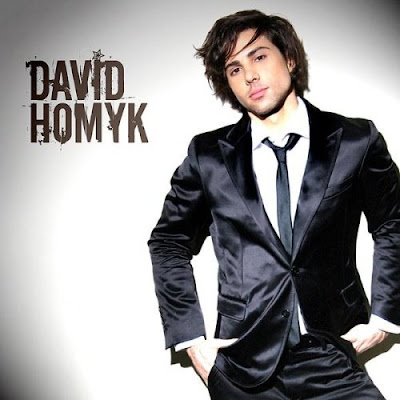 David Homyk is a jack-of-all-trades when it comes to the entertainment world. Singer, songwriter, producer, actor and model, this Canadian born son of Virginia has worked with some of the biggest stars in show business. As a musician/producer, he's worked with Beyonce Knowles, Solange Knowles, Kelly Rowland, Aqualeo, Cheri Dennis and Cherish. As an actor, he appears regularly on All My Children, with numerous appearances on The Tyra Banks Show, Sex And The City and One Life To Live. Homyk also has a lot of presence in the advertising world, appearing in ads for Burlington Coat Factory, Capri Sun and Anheuser-Busch (the official mixologist for Bud Light Lime). In 2008, Homyk turned out True Story, a collection of seven original songs written, performed, mixed and produced by Homyk.

Homyk opens with the radio edit of Hard To Make A Friend, a relatively average tune with a significant amount of vocal FX work going on. Homyk sounds vaguely robotic, like a cross between Liam Gallagher and Max Headroom. The music itself has a vaguely lifeless quality; played primarily on acoustic instruments but with the mechanical nature of a computer. Fool In The Middle sounds different enough to say it's different from Hard To Make A Friend, but sounds like it could almost be alternative take of the same song, musically. All In All has a bit more verve to it, and gets points for novelty in sound but likely won't garner a lot of attention after the first or second listen.

Addicted To You is catchy and acoustic but very danceable. Homyk shows a touch for Pop hooks here that bodes well. It Makes You Believe is the highlight of the album. Sounding again a bit like Oasis, Homyk's look back at a relationship that's crumbled has real heart and soul. The law of averages kicks in thereafter on It's So Easy Now. Homyk goes from touching and real to predictable and repetitive in the course of one song. Knock Knock might not be the best song presented here, but it's the one most likely to be a Pop hit. It's the song where the guy begs to come back; catchy and annoying at the same time. It's the sort of song that catches on with the teeny bopper set and dominates the radio until it disappears as quickly as it showed up. Homyk closes out with the original version of Hard To Make A Friend, sounding like Alvin And The Chipmunks chipped in on the introduction.

True Story is a real mixed bag; there are a couple of songs here that show real hope for Homyk as a songwriter and performer, and he definitely has a distinctive Pop touch, but there are some touch moments to get through as well. True Story's biggest failing is probably the lack of another songwriter or contributor to bounce things off of. Sometimes material blooms with the advent of creative tension. Homyk has enough talent as a writer to exploit the benefits of such a relationship. The listening experience would also have been more enjoyable without all of the special effects on the vocal line. The best producers know when to play with their toys and when to put them away.

You can learn more about David Homyk at www.myspace.com/davidhomyk. You can purchase True Story as either a CD or a Download from Amazon.com.
Posted by Wildy at 5:33 AM